Luke Keary sensationally slammed Cody Walker for being "disrespectful", while Sam Burgess welcomed the heavy treatment from Latrell Mitchell that forced him from the field for a head injury assessment. 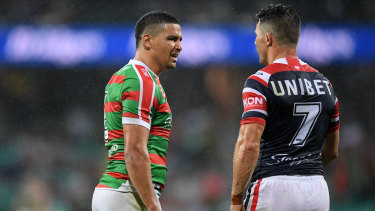 The latest instalment of the wonderful rivalry that is South Sydney versus the Sydney Roosters had its moments on Friday night in the rain at the SCG.

Mitchell finished the night bloodied and was charged by the match review committee on Saturday for his 55th-minute swinging arm that collected Burgess in the mouth. The powerhouse centre was fined $1650, but cleared to play next weekend.

Souths coach Wayne Bennett noted after the game: "If it was anybody else [other than Burgess] they would have been knocked out".

Mitchell told The Sun-Herald after the match he had nothing to worry about, even though he had loading from a crusher tackle during last year's finals series.

"All I saw was Luke Keary go low – he dropped a level – I came in to finish the tackle and I've clipped him,'' Mitchell said. "I don't think I was in the wrong. Big Sammy Burgess is a beast, he brings his A-game every week. He was running some very good lines at our left edge and I had to be aggressive on him.

"There were no angry pills [Friday night]: it was a game of footy, it was competitive, that's all it was. The game wasn't going our way, we didn't get the result, I was just in the moment.'' 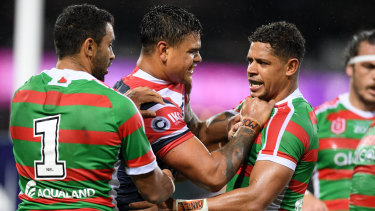 Not a grub: Sam Burgess has leapt to the defence of Roosters star Latrell Mitchell (centre).Credit:AAP

Burgess defended Mitchell, saying the NSW star was "no grub" and was more frustrated with being forced from the field at such a vital stage of the game for a HIA.

"Latrell is not a grub, he plays the game hard, he gets stuck in and he's a physical guy," Burgess said. "He wanted to be physical [Friday night]; sometimes he plays close to the line and you can get it wrong sometimes. I understand it, I'm exactly the same.

"He was losing the game, of course he wants to try and do something to turn the game around. I respect that as a player.

"I think not a lot needs to be made about it. It's just part of the game.'' 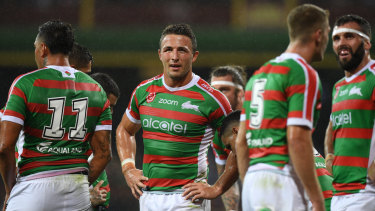 Enforcer: Souths forward Sam Burgess wasn’t happy to be taken off for a head injury assessment.Credit:AAP

As for coming off when Souths moved ahead 20-12 with just under 20 minutes left on the clock, Burgess said: "I'm never happy when I'm coming off, I don't like coming off. You see a couple of plays after that incident I caught the ball under pressure. I'm fine – no signs of any problems. I passed the test on the field and off it.

"The game are trying to protect players and you need to respect the rules, but I'm glad we didn't lose the game in that period. You have to be off 15 minutes – I looked up and there were 19 minutes left."

Walker was a teammate of Mitchell in the Indigenous All Stars side last month and said: "He plays the game really tough, and it was a great reminder of what great rivalry there is between Souths and the Roosters have.''

Walker, however, found himself at the centre of a Keary verbal blast on Saturday.

Keary used to be the proud owner of Walker's No.6 Souths jersey, even winning the 2014 premiership with the club, but was far from impressed with the way he carried on late with Roosters No.7 Cooper Cronk.

His latest comments about Walker will hardly go down well with Souths owner Russell Crowe, to whom he nearly shaped up during a pre-season camp and ultimately ended his long-term future at the Redfern club.

"There was obviously that incident at the end of the game when one bloke wants to carry on and be a bit disrespectful, but, everyone who plays the game knows that’s how he plays it,'' Keary said.

"That’s fine. If he wants to go around doing that it’ll come back to him.''

When pressed on who exactly he was talking about, Keary fired back: "Cody Walker.''

For the record, Souths and the Roosters – and Walker and Keary – clash again on a Thursday night in the final round.

Have we seen the end of the NRL as we know it?