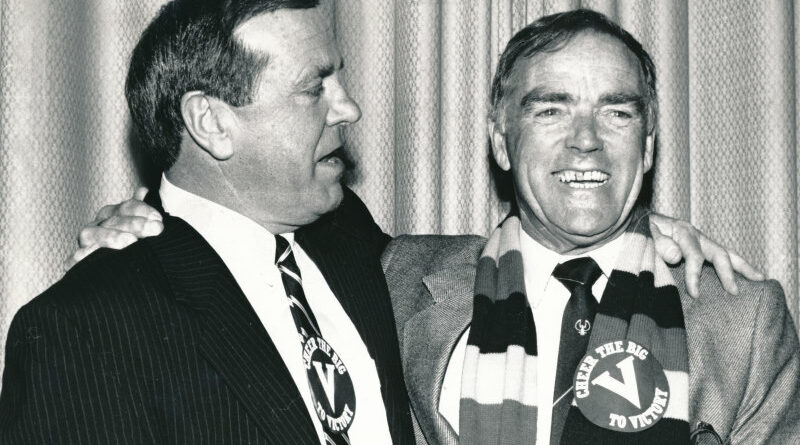 As Ted Whitten was to Victorian footy, so was Neil Kerley to South Australia. Small wonder the sparks flew between them.

They were born six months apart and had parallel and equally eminent playing careers in their respective states. 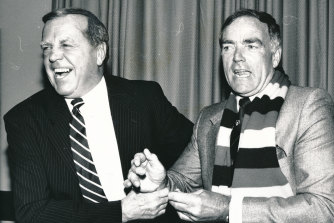 For Whitten, interstate footy became the big stage he rarely got to stride with Footscray. Only nine of his then record 321 games were finals. He played for Victoria 29 times and later championed the Vics in state of origin footy as nobody else could. He was the inimitable EJ.

For Kerley, state footy was where he could prove himself in lieu of ever playing in the VFL, a decision he would regret later in life. “If you wanted to earn your spurs as a footballer,” Kerley said to Mike Sheahan on Open Mike in 2014, “against Victoria was the way to earn them.”

He played 32 games for SA and later became Whitten’s equal and opposite force as an apostle and promoter of state of origin.

State versus state football at AFL level has been redundant for so long it is hard to remember when and why it mattered. But it did, especially to South and West Australians because the VFL would routinely take their stars and turn them back against their home states, making for a lopsided ledger. 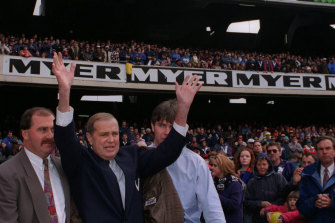 Whitten, supported by his son (left) and Danny Frawley (right), waves to the MCG crowd at the 1995 State of Origin clash.Credit:Ray Kennedy

In a panel show before Victoria hosted SA at the MCG in 1963, Jack Dyer was asked what tack he would take if he was coaching Victoria. “I’d give ’em a pep talk,” he said, “and go to the races.”

Kerley, SA’s vice-captain, was on that panel. At a photo opp the next day, he asked SA coach Fos Williams if he could have a word to the team. “Something’s going to happen at the opening bounce,” he told them. “Don’t get involved. Play footy.”

As nearly 60,000 watched at the MCG, the “something” was the felling of Geelong’s Alistair Lord, the reigning Brownlow medallist. It was an effective distraction. In a flash, SA kicked the first three goals, and although headed in the last quarter regathered to win. Mere mention of it still prompts heads to bow in reverence in SA.

“Can’t get better than that,” Kerley said to Sheahan. “The Vics had open team selection that year, not two from each side. And we beat ’em. That was a special moment in footy for me.” When SA landed back in Adelaide, there were 8000 to greet them. 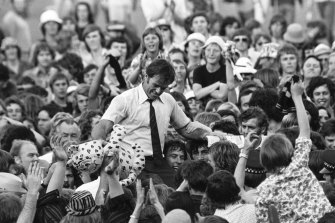 Whitten did not play that game, but his and Kerley’s orbits were crossing. Kerley remembered copping one from Whitten while waiting under a hospital handball in the Australian championships in Hobart in 1966, and picking himself up and chasing his assailant. “Have a guess where I caught him?” he said. “Standing right alongside the umpire.”

The violence reads as old hat now, but the times were the times. There was an element of theatre to it, but only an element. Kerley’s nickname was “Knuckles”. His hands were as gnarly as an old wicketkeeper’s, and you can conjecture as you like as to how they became that way.

Whitten and Kerley stirred footy’s imagination. State of origin is exclusively associated with rugby league now, but was first an Australian rules concept, launched in 1977. It evened up interstate footy and for 20 or so years flourished, not least because of the passion and showmanship of Whitten and Kerley. 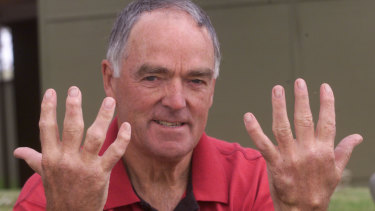 Here was more great theatre. Whitten and Kerley became in fact firm friends. “EJ was not only a great player, but a great guy,” Kerley said.

At length, the national competition usurped state of origin. By 1995, both it and Whitten were dying, but there was a memorable last hurrah. As an ailing and nearly blind Whitten was driven around the MCG before a Victoria-SA match, Kerley, the SA coach, stopped the car for an emotional embrace.

“I went down to the rooms and said, ‘we haven’t got a snowball’s chance today. They’re playing for EJ,’” Kerley said. So it proved, to the tune of 63 points. Two months later, Whitten died, aged just 62. Kerley was a pallbearer at his state funeral.

Kerley soldiered on for another quarter of a century, playing various roles, but always personifying SA footy. His was a legend that did not need gilding. 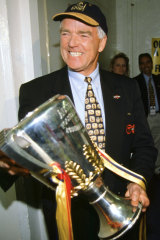 Kerley with the Adelaide Crows’ 1998 premiership cup. He was footy manager.Credit:The Age

Kerley imagined himself as a player as others saw him, an indomitable ruck-rover in the Ron Barassi mould. He always joked that he did not come to Melbourne because there was not enough room for him, Barassi and Whitten.

The more prosaic truth, he later said, was that to get a clearance, he would have had to stand out of footy for a year, and he wasn’t prepared to do it.

Once the chain mail came off, Kerley developed and kept friendships with many supposedly detested Victorians, so much that one of several 80th birthday celebrations was staged in Melbourne. Now, like Whitten, he has been taken from us in a sad and untimely way.

But wherever old footballers go, it’s easy to imagine the reunion of Kerley and Whitten, again in their state blazers, shadow sparring and winking.