It's the rule that shows that even when the NRL says they got the decision right, they actually got it wrong, and proves that Canberra were the victims of an incorrect call in Sunday's controversy-laden NRL grand final.

Rule 16.9 of the NRL's official 2019 Rugby League Laws of the Game, which governs when referees can change their calls, states once referee Ben Cummins had signalled six again in the decider he can only change that decision due to foul play. 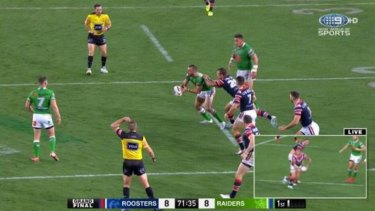 Ben Cummins clearly signals a new set of six for the Raiders, before reversing his decision moments later.Credit:Channel Nine

While the six-again call might have been wrong, the rule clearly states the original decision should not have been changed.

The NRL has already stated it is likely to review several rules during the off-season. The governing body on Wednesday acknowledged the existence of the rule, but said it was written in a time that predated the two-referee system and the television bunker.

The Raiders were on the wrong end of a similar decision in 2018, when a touch judge put his flag up and took it down again to allow Cronulla winger Sione Katoa to score a controversial match-winning try.

The referee judges on matters of fact and shall not subsequently alter those judgments. He may cancel any decision made if prior foul play of which he had no knowledge is reported to him by a touch judge.

Cummins' six-again recall was not the only guideline breached in the Roosters' grand final victory, with Roosters trainer Travis Touma's interference early in the first half also coming under fire.

Touma started the game on the field and stayed on the field for the Roosters' entire first set and returned to the field as soon as their second began. It was at the end of that second set that he was struck in the head by the ball after a ricochet from Raiders forward Soliola.

While some trainers aren't meant to be on the field after the fourth tackle, medical trainers – which the Touma was – are allowed to be. However, NRL guidelines state the medical trainers' role is to attend to injured players, provide water and assist with interchanges. There were no Roosters players injured in the opening three minutes and they made their first interchange after 13 minutes.

The guidelines also state the trainer's presence can't "constitute a disadvantage to the opposing team". Given the ball hit Touma and almost certainly denied the Raiders a try-scoring opportunity, it would be hard to argue the Roosters trainer didn't disadvantage Canberra. The Roosters were given the scrum feed and a fresh set of six because it occurred in their attacking half, a rule that dates from 1908.

Raiders chief executive Don Furner described the rule under which that decision was made as outdated. The Roosters could face a potential fine and breach notice for breaking NRL guidelines.

Daniher aims to give the Bombers his best in 2020

Six Nations England vs Ireland form guide: Itoje to target Sexton
We and our partners use cookies on this site to improve our service, perform analytics, personalize advertising, measure advertising performance, and remember website preferences.Ok