Salford Red Devils notched their seventh win in a row and all-but confirmed
their place in Super League’s semi-finals with a hard-fought 20-12 victory over
Leeds Rhinos.

The Red Devils ended a decade-long losing streak at Headingley thanks to tries from Niall Evalds, Jake Bibby and Joey Lussick. Four goals kicked by Krisnan Inu were enough to hold off a fast-finishing Rhinos side and help Salford notch an important result.

The victory sees the Ian Watson’s side keep hold of fourth spot, two points ahead of sixth-placed Hull FC, on the ladder with just one round of the regular Super League season left. 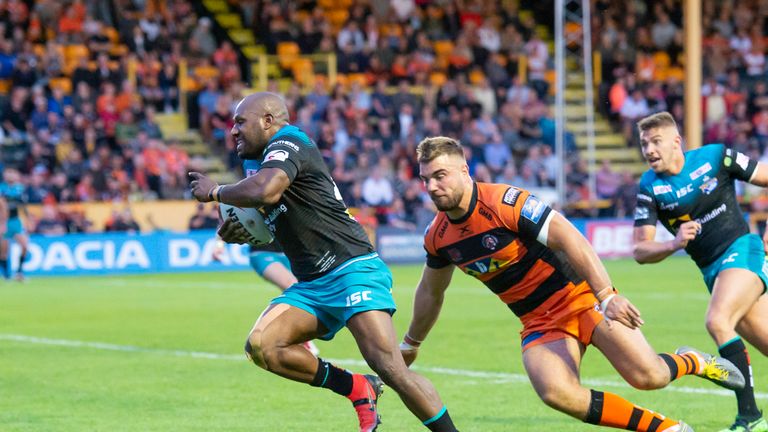 Rhinos’ England forward Stevie Ward made his return to action after more than six months on the sidelines with a knee injury, while opposing half-backs Tui Lolohea and Robert Lui faced their former teams for the first time after swapping clubs in a loan move in June.

Salford started strongly with Logan Tomkins held up over the try-line after 11 minutes and, 10 minutes later, it was the visitors who broke the deadlock due to Evalds.

The full-back finished off a great break from the elusive Jackson Hastings to score beneath the posts. Inu converted the try to give Salford a 6-0 lead and, soon after, the Red Devils were in again.

A quick shift to left found Bibby and the centre stepped inside some meagre defence to score. Inu made no mistake to add the extra two points, taking the score to 12-0. Leeds hit back three minutes from half-time thanks to half-back Richie Myler. A great Liam Sutcliffe offload put Jack Walker through a gap, and he found Myler in support to beat Evalds to cross. Rhyse Martin’s conversion was successful to make it 12-6.

Inu added another penalty goal right before the break to extend Salford’s lead to eight points.

In the second half the Rhinos lifted their intensity, but the Red Devils’ defence was up to the task. A series of back-to-back penalties had Leeds camped on the visitors’ try-line, but Salford kept turning them back with terrific tackles and strong contact.

Eventually they cracked in the 54th minute. A grubber from Brad Dwyer caused havoc in the in-goal area, fooling the visitors’ defence, and forward Jamie Jones-Buchanan pounced. Martin’s conversion from right in front cut it back to 14-12.

Latrell Mitchell no longer the only centre of Roosters’ danger

Tottenham vs RB Leipzig: ‘Brave’ Julian Nagelsmann justifies the hype to outclass Jose Mourinho
We and our partners use cookies on this site to improve our service, perform analytics, personalize advertising, measure advertising performance, and remember website preferences.Ok