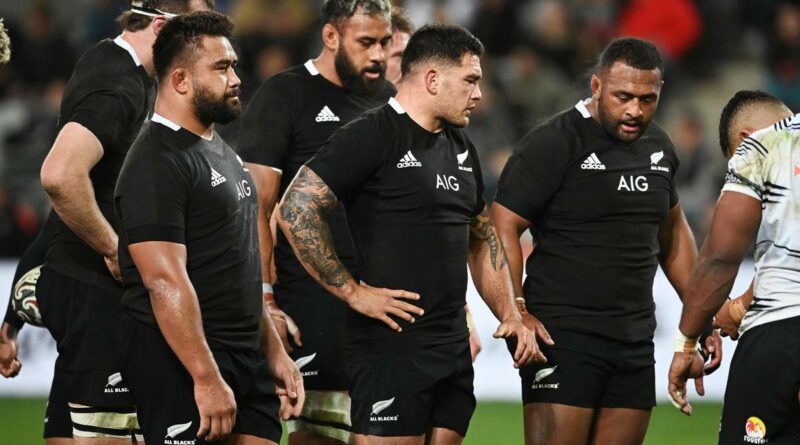 July was supposed to present the All Blacks with a chance to ease into their work. Last week in Dunedin, in their first proper test of the year, instead exposed familiar flaws. Liam Napier analyses where quick fixes are needed in the second outing against Fiji in Hamilton on Saturday.

Bullied, beaten to the punch, call it what you will. The All Blacks’ efforts at the breakdown last week fell well short. Time and again Fiji’s hulking athletes smothered the All Blacks like Aotearoa’s long white winter cloud enveloping the sun to leave Ian Foster’s men rattled.

The All Blacks eventually ran in nine tries under the roof but their 11 turnovers and 15 penalties conceded is not good enough in the context of the ambition to regain the No 1 ranking. The struggles here are underlined in the All Blacks’ 87 per cent ruck efficiency (62/71), with Fiji running at 95 per cent (81/85).

The assertion that the New Zealand public underrated Fiji holds sway. The vast majority of the Fijian squad ply their trades in the best European leagues, and are standouts in doing so.

Yet there is no escaping Fiji’s 11th place in the world rankings nor the fact they are not at full strength, with Semi Radradra among their absent leading players.

After emerging from quarantine, Fiji only held two trainings together as a full squad and, prior to last week, had played one test since the 2019 World Cup. Yet they still managed to consistently dominate the All Blacks at the source.

Being caught off-guard is not an excuse. Near every underwhelming All Blacks display in recent times – defeats to England and Argentina prime examples – can be traced to the lack of a dominant forward platform or issues at the ruck.

All Blacks forwards coach John Plumtree is renowned in South Africa for the physical edge he brought to the Sharks. Closer to home, Plumtree inspired a workman-like Hurricanes tight five to their maiden Super Rugby title in 2016. Yet he clearly has a major task evoking a consistent attitude from the All Blacks pack to own the cleanout.

As much as anything else, it is about attitude. Accuracy can be coached. Urgency and aggression comes from within.

This week the All Blacks must commit more numbers to their cleanout. Winning the race on attack and defence there should be their top priority. Get that part right, and attempting to counter the sizable, strong Fijians over the ball will be much easier. Give the visitors chance after chance to get set, and another frustrating evening in Hamilton awaits.

Another part of the problem with the breakdown. Too often ball carriers – due to the ferocity of the Fijians in the collisions – immediately hit the deck and became isolated. Fighting a couple more seconds to stay on their feet is enough to give supporting teammates the chance to bridge over the ball and secure possession.

The All Blacks forward runners were largely flat and predictable in Dunedin. For this reason, they were regularly picked off behind the gain line which forced the backline to play off a static platform and led to indecisive decision-making.

More variety is needed. Where are the inside balls close to the ruck, the short-side plays, changes of angle or forward runners hitting the pass at pace? The backdoor play to the No 10 or fullback is widely used and, therefore, well read by now.

On attack the All Blacks were their best executing from set piece – the drive working especially well with Dane Coles claiming three tries there – but such stable platforms to manipulate defences are not always available.

Injecting genuine go-forward and striking from ruck phase play must improve. Increasing the offloads – the All Blacks managed six against Fiji – would also help get in behind the defence.

Wayward and wasteful at times. Beauden and Jordie Barrett were both guilty in this regard. Cross-field kicks didn’t go to hand; attempted grubbers in behind were blocked while kicks from the backfield seemed to be hoofed with no real purpose.

Perhaps the penchant for kicking, particularly in the first half, was due to the All Blacks’ inability to retain possession or deal with Fiji’s defensive pressure. Whatever the reasoning, the All Blacks certainly lacked patience in their approach to building phases. Expect more ball in hand to be favoured this week.

Every coach stresses the importance of executing the exits after scoring points. Immediately inviting the opposition back into your half by botching the restart amounts to coach-killer moments. In this regard, the All Blacks gave Foster heart palpitations by dropping several restart receptions.

In a case of basics gone wrong Patrick Tuipulotu did not get this core skill right on two occasions. Foster noted his men swallowed ample restarts the previous week against Tonga, so there were no excuses for their sloppiness in this fundamental area.

Jamie Jones-Buchanan: Testimonial game the greatest moment of my career