AFLW star Sharni Layton insists the football world will be "pleasantly surprised" by the depth of talent on show this season despite the inclusion of four new teams.

This year's competition will feature 14 clubs split into two conferences, with four new teams – Gold Coast, Richmond, St Kilda and West Coast – lining up when the season starts on February 7. North Melbourne and Geelong were only added last season, sparking questions as to whether quality of depth will be an issue.

Layton, who on Saturday attended the inaugural AFLW directors and delegates conference as a Collingwood representative, said supporters and broadcasters would see improvement in a competition that is entering its fourth edition.

"I know even from our training from this time last year to this year, we are training three times as hard," she said.

"The physicality, how much we have learnt from the game, the structure of the game, our own game plan [have improved]. I think those [new] teams will just fit in seamlessly and the standard will continue to rise because of how much we are pushing each other and how much we want the game to grow in the short period of time."

The lack of goal scoring was one issue last season but all parties are hopeful that will ease.

"I am, obviously, extremely new to the game but even from playing VFLW, that's a standard below AFLW, coming into [last year's] finals series, it was full on," Layton, preparing for her second AFLW season, said.

"So the depth of competitions underneath AFLW have grown so much and those girls are developing so quickly. I think everybody will be pleasantly surprised with the standard of the game."

There was much to debate at the Melbourne-based conference, with AFL Players Association CEO Paul Marsh confirming a review of the competition was underway. This review had been enshrined in last year's collective bargaining agreement.

There had been a schism between some players and the AFLPA over pay and conditions during the CBA discussions but a deal with the AFL was eventually struck, which agreed to a steady increase of the number of matches over the next three years.

Just how the season looks from there is the hot topic, for Layton and Marsh said players wanted to become professional but to do this a longer pre-season, season and better pay were needed. 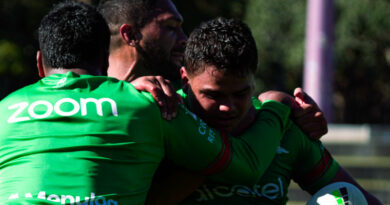