Off a limited preparation with a dodgy knee, Richmond star Tom Lynch played in every game, kicked 63 goals, won a flag and was awarded life membership in his first year at Punt Road.

The sky's the limit in 2020 after he avoided post-season surgery and reported for the Tigers' pre-season program ready to take part in full training. 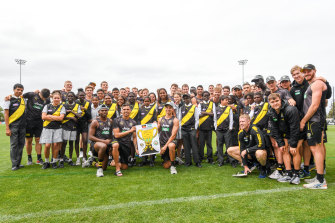 Tom Lynch, second from right, was on hand with his teammates as the Melbourne Indigenous Transition School class of 2019 graduated on Tuesday.Credit:Justin McManus

"I'm feeling great, I've been in everything, so it's really nice to be out there this time of year instead of in the gym or swimming in the pool," Lynch said.

"Everyone wants to be out there in pre-season … it's a lot more fun running around kicking footies than being on the grinder.

"It's good to be in this position.

"I can focus a bit more on my craft compared to this time last year when I was just battling and trying to get fit for round one.

"I want to build on last season and hopefully improve a little bit." 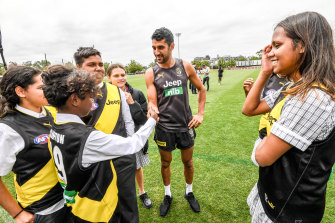 After the grand final romp over GWS, Lynch and his more senior teammates returned to training in the first week of December.

The former Gold Coast skipper is intent on building the bond with veteran tall Jack Riewoldt this summer.

The pair didn't train together much after Lynch arrived as a free agent from the Suns.

Then they only shared the forward 50 in 13 games last season as Riewoldt battled wrist and knee injuries.

"I think the more we play with each other the better we'll be," Lynch said.

"I felt like our chemistry really grew towards the end of the year and I'm looking forward to growing that again this year."

Lynch spoke to reporters after Tuesday's graduation ceremony for the Melbourne Indigenous Transition School, which is housed at the club's Punt Road headquarters.

Beale: Hosting 2027 Cup would be amazing