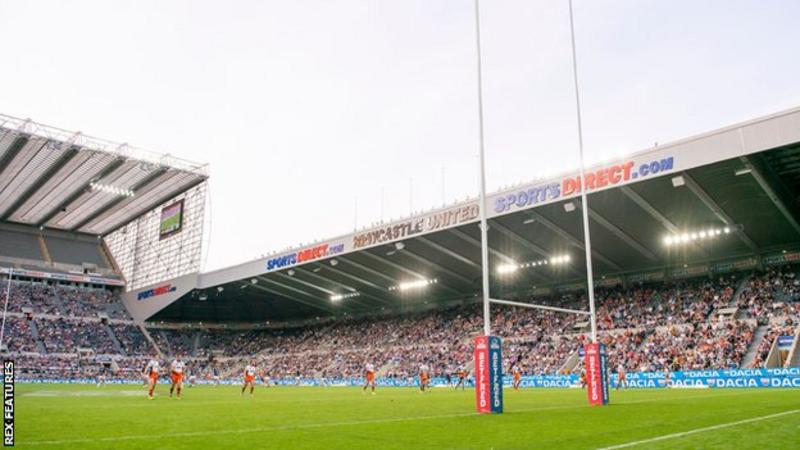 Super League has cancelled this year’s Magic Weekend because of ongoing restrictions caused by the coronavirus pandemic.

The event, which sees all 12 sides play at the same venue over two days, was due to be held at Newcastle United’s St James’ Park on 23 and 24 May.

It was postponed in April, when the league said it hoped the event would take place later in the season.

The 2020 Super League season is due to resume behind closed doors on 2 August.

No matches have been played in the competition since 15 March.

Although there will be no Magic Weekend this season, a deal has been agreed in principle for it to return to Newcastle on 29 and 30 May 2021, with tickets purchased for this year remaining valid.

Magic Weekend has become one of rugby league’s major events in the calendar, aimed at growing the audience of the sport in new areas.

Since its first incarnation at Cardiff’s Millennium Stadium, the event has been played at Edinburgh’s Murrayfield, Manchester City’s Etihad Stadium and, last year, Anfield in Liverpool.

The most successful venue for the competition in terms of attendance has been Newcastle, with a record cumulative crowd over the two days of 68,276 in 2016, and more than 40,000 attending in a single day the previous year.

Hull KR will play Toronto Wolfpack, champions St Helens will face Catalans Dragons and Huddersfield will take on Leeds all at the same as yet unnamed venue when Super League restarts in August as the sides play matches that were postponed before the season was suspended.

A full round of fixtures will follow during the weekend of 8-9 August.

‘Let our voices be heard’: Women not consulted over anthem axing