Patrick Lipinski feels his move to Collingwood is the right fit.

The 23-year-old wants more opportunities to play senior footy and, out of contract, was swapped for pick 42 on Monday, having played 56 games for the Western Bulldogs but only 11 this past season.

“I have a lot of friends and people at the Bulldogs who I will always be grateful to,” Lipinski said. 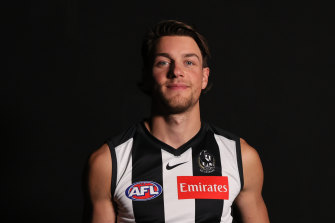 “To evolve and build on the foundations of my game, though, I know moving to Collingwood is the right thing. It’s the right fit. There is something of a new beginning taking place at the Pies, with a relatively young list and new coaching staff. I’m keen to share in that.”

Collingwood football general manager Graham Wright has had his eye on Lipinski for several years.

“We identified Patrick as a player of talent, of the right age and positional need for our group,” Wright said.

“He is a competitor who is desperate to develop his game. All of those qualities and attributes stood out to us and made him very appealing.

“I think we can be very good for Patrick, and I’m confident he will really add to squad. We are really pleased to welcome him to the program.”

Western Bulldogs forward Cody Weightman has revealed he will undergo ankle surgery on Tuesday and faces a 10-12 week recovery.

Weightman said he had battled with the injury for much of the 2021 season but strapped it up each game and kept playing. He went on a short holiday in Perth before the operation.

“It was just fine to strap in and play with, but it was just there lingering a little bit this year, and it’s better just to have it fixed and not have to worry about getting strapped and whatnot,” Weightman told AFL trade radio.

North not keen on dealing Xerri

Xerri has requested a trade to St Kilda after being stuck behind Todd Goldstein, but Rawlings has high hopes for the 202-centimetre big man and Xerri has one year left on his contract.

”He’s come along really well, Tristan. He’s a competitive ruckman, he follows up at ground level and stands down the line and takes a grab,” Rawlings told SEN 1116 on Monday.

“We’ve got no real interest in losing Tristan at all, but he has requested a trade.

“It would have to take something very attractive for us to even consider it.”