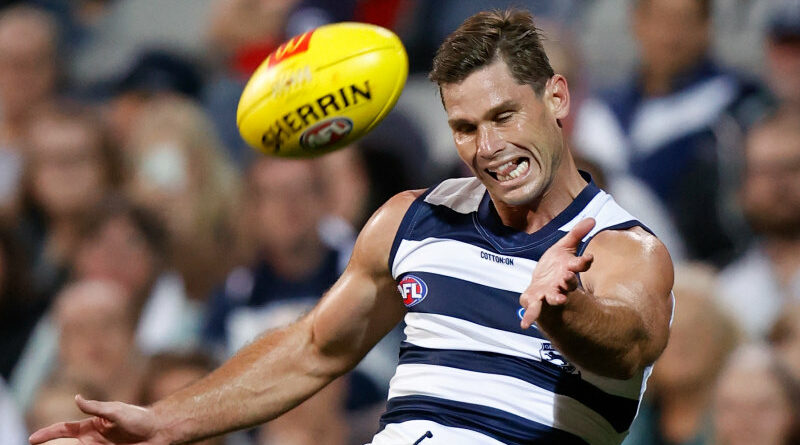 Geelong have extended their winning streak against Brisbane at GMHBA Stadium to 13 with a tough win in a Friday night classic befitting two top four teams.

They did so despite losing vice captain Tom Stewart to gastro before the bounce and with Joel Selwood sitting in the stands resting after his record-breaking match a week earlier.

It was a match the Cats should have won easily in many ways as they dominated all statistical areas but inaccuracy kept the margin to just 10 points as a dogged Brisbane kept coming.

Tom Hawkins kicked five goals to prove the difference as the lead changed nine times in the first three quarters as the efficient Lions held on furiously hoping to pounce as Geelong kept the door open throughout. 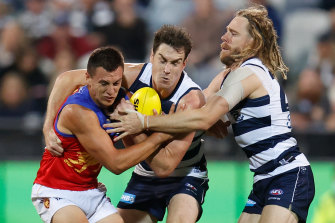 Hugh McCluggage of the Lions is tackled by Jeremy Cameron and Cameron Guthrie.Credit:AFL Photos / Getty Images.

During the third quarter Geelong tried to put their foot to the floor and accelerate away from the Lions but they could not pass Brisbane’s marking defenders with Marcus Adams’ and Harris Andrews intercept marking frustrating Geelong.

Such was their defensive dominance the Cats could not score for their next 14 inside 50s while the Lions managed to kick four goals from their six inside 50s in that quarter.

However at home with a loud crowd Geelong eventually edged themselves in front four minutes into the final quarter when Jeremy Cameron kicked his first goal and then held on with smart, tough, high-pressure football. 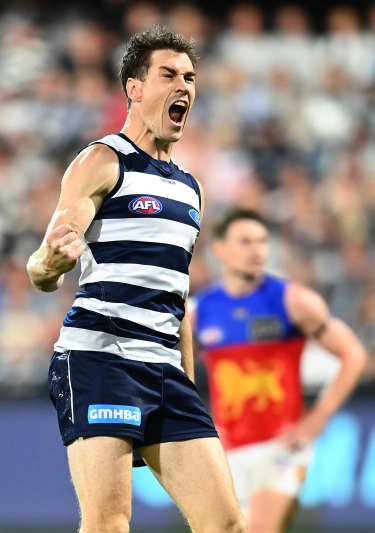 The Lions had been as efficient as an inner city barista finishing the match with 11.4 (70).

He doesn’t often get the kudos but the game was set up for Geelong to win by their coach Chris Scott who got his plans right with Mark O’Connor holding Lachie Neale. He had Rhys Stanley take centre square hit outs before Mark Blicavs tested Darcy Fort around the ground.

Key forward Cameron then played high alongside his mate Brad Close while Mitch Duncan folded back to move the ball from defence. Isaac Smith ran up and down the ground but his constant presence at the back of the stoppage worried the Lions.

The game was a fight with one punch met with another punch in the first half as each team went goal for goal in a switch away from the early season trend where goals had been coming in bursts. No team managed to kick back to back goals in that first half.

The Cats would have been ruing their missed chances as they squandered five set shots in the first half, their system creating better opportunities than the Lions could muster.

However the Cats haven’t finished top four so often without being unable to overcome difficulty and faced with a challenge and they made sure their territorial dominance eventually landed them the four points keeping them equal with Brisbane on three wins.

Sam De Koning was impressive in defence and Brad Close continued his good form. The Lions defenders kept them in it but their midfield were unable to create enough chances for them to break a drought that continues to define this era.

Geelong will be strengthened with Stewart back next week and look a genuine threat again while the Lions will take heart that their system is good. Lachie Neale was well held by O’Connor.