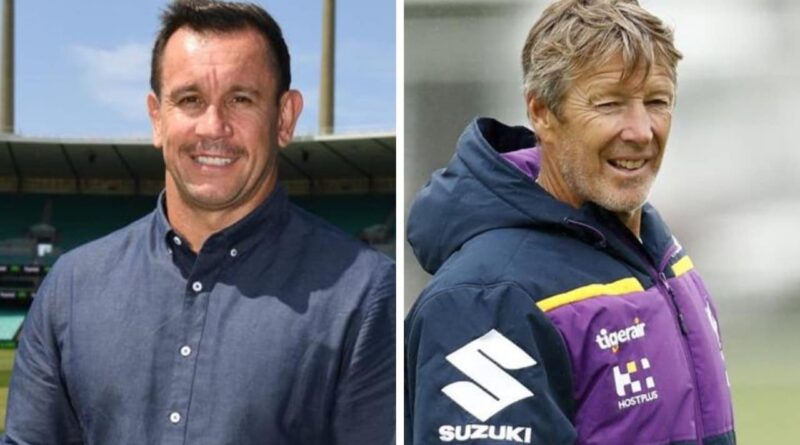 NRL great Matthew Johns has re-told the moment he was left embarrassed after a gaffe inside the Melbourne Storm dressing room.

The notorious footy larrikin has more stories than anyone in rugby league – and his revelations about being cooked by a Craig Bellamy death stare is another cracking yarn.

Johns worked as a consultant with the Storm for more than a decade and was head-hunted by Bellamy to help the Storm’s playmakers, including Cooper Cronk, take the next step forward in their development.

However, there was one time when Bellamy regretted his close relationship with Johns as he was delivering a spray to his players.

In a segment on SEN’s Morning Glory in Melbourne, Johns recounted how he set himself up for an embarrassing moment inside the Storm’s inner sanctum in 2013.

“About seven to eight years ago I got off the drink for about 12 months,” Johns said.

“We got around to August, and my wife said, ‘You’ve been a perfect prisoner, why don’t you go down to your local today and have a drink and get your mates around’.

“I was just walking on sunshine, I was heading down to the local, first drink in 12 months and as I go past Manly Oval, I hear someone yell my name.

“It was Craig Bellamy and Frank Ponissi from the Melbourne Storm, and they were having a little bit of a cricket game, forwards versus backs and I said, ‘What’s going on boys?’

“They told me they were playing Manly at Brooky (Brookvale Oval) that night, and they said, ‘Listen, why don’t you bring your young fellas to the game and come and see the boys after the match, they’d love to see you and the family’.

“I replied saying, ‘I’ll be there for sure’, but I had no intention because I was going to fill up down at the local.

NRL: Reggie the Rabbit was filmed on the end of some abuse by members of the crowd at Stadium Australia on Good Friday….

NRL: Reggie the Rabbit was filmed on the end of some abuse by members of the crowd at Stadium Australia on Good Friday.

“I was down at the local betting on the seventh race at the Ascot, and I’ve had more than my fill when my young fella Cooper who incidentally is at the Storm now rung me and said, ‘The Storm are playing at Brookvale can we go to the game?’. I said yes, and we got in a taxi and I picked him up.

“We go to the game and I start whacking a few cans and I haven’t had a drink in 12 months.

“Anyway, it’s a horrible night for the Melbourne Storm, Manly put the cleaners right through them and the siren goes and I’m not in a good way.

“I was horrified because they let me straight into the sheds and not only the sheds, but they let me into the inner sanctum, I’m standing there, and Craig Bellamy is giving the side a horrible spray.

“So, I thought it’d be funny if I piped up, so I said, ‘Ease up old man! Take it easy on them, a loss every now and then would do them good’.

“He was staring at me and the players were looking at me and I said, ‘Listen boys, I’ve had my first drink in about 12 months, how about we head out on the town?’

“I got a Gatorade cup and filled it up and walked over to Finchy (Brett Finch) and told him to drink up, but he said, ‘Matty it’s half time!’

“Since that time, I’ve sworn off the vodka.”

The hilarious moment didn’t stop Johns continuing to work with the Storm for several more seasons and it is clear Bellamy still values his friendship with the 49-year-old.

Bellamy in August was happy to take a cheeky pot-shot at Johns and brother Andrew when he announced Johns’ son Cooper would be making his debut for the Storm.

“We’ve had Cooper doing most of the stuff there (at halfback) this week, so hopefully if Jahrome (Hughes) doesn’t play that’s a good experience for Cooper and hopefully he’ll be ready to go,” Bellamy said.

“He’s a pretty level-headed kid actually, on and off the field, which is probably not a Johns trait — especially off the field.

“I hope Matty and Joey don’t mind me saying that but he’s had a good education in life and footy obviously.”

Cooper remains with the Storm, but is stuck behind halves Jahrome Hughes and Cameron Munster and has been playing with the Sunshine Falcons in the Queensland Cup.