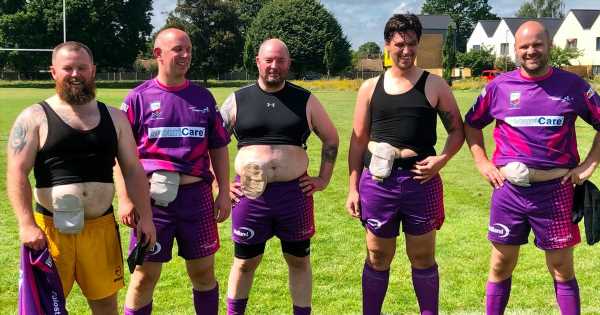 Like thousands across the country, Kav Ellison and Tom Kaye played full contact rugby league at weekend – the only difference was they were wearing stoma bags.

Ellison and Kaye – who both lined up alongside future Super League stars as juniors – are members of Team Colostomy UK, which aims to empower people wearing stomas and raise awareness of the conditions that lead to it.

Around one in 425 people are currently living with a stoma, which is used as a diversion from the bowel or bladder following surgery for a range of illnesses.

For Ellison – a Chorley Panthers junior who counts Warrington winger Josh Charnley as his former team-mates – that was ulcerative colitis. He had his operation six years ago aged 24, and returning to rugby league fields has underlined the possibilities open to him.

“People think it’s the end of the road if you have a bag and it’s really not,” Ellison said. “I very rarely notice it, it just becomes the norm that you have it. I don’t see it as affecting me in any way, shape or form.

“I had colitis for 18 months to two years, and never got back to full health, nothing worked. I tried umpteen different things and in the end I had the operation.”

Two years ago Ellison saw a post on Twitter about Team Colostomy and thought it would be perfect for him.

“The main aim of it is that you can still do things, anything’s possible, and we’re just trying to rid the stoma stigma,” he added. "It’s kind of proving a point, especially with something like rugby league – it’s more physical than football.”

Kaye – brother of Batley hooker Ben and a junior team-mate of Huddersfield and Bradford’s Aaron Murphy – first had stoma surgery in childhood.

“I had a five year period with a bag that wasn’t the greatest – there wasn’t any social media or Twitter back then so not the support there is now,” he explained.

“I had a rough time, I had it back off, but developed a liver condition and further colitis, and got Crohn’s Disease in my small intestine. They told me I needed put my bag back on three years ago and I fought against it because of the bad experiences I’d had before.

"But it’s been the beginning of a new start for me. It’s all started over for me again and I’ve got lots of opportunities just through opening my eyes to things.”

Former Super League star and current England Knights coach Paul Anderson is among those to publicly back the campaign after having a temporary stoma early in his career. On Saturday Team Colostomy edged out amateurs Chorley Panthers in front of an impressive crowd, with the tackles and hits every bit as physical as at any other ground around the country.

Kaye, 30, added: “The world’s a shallow place at times, we see that through some of the media stuff the charity does that have young kids who have been ridiculed at swimming pools with bags. Some of these bags save people’s lives, and they don’t stop exercise, it’s just about exploring what possibilities you can do.

“If we can do rugby, swimming is every possibility, there’s football, golf, any number of sports. Just because you’ve got a stoma doesn’t mean the world stops – that’s what we’re trying to prove.” 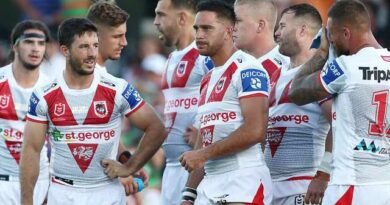