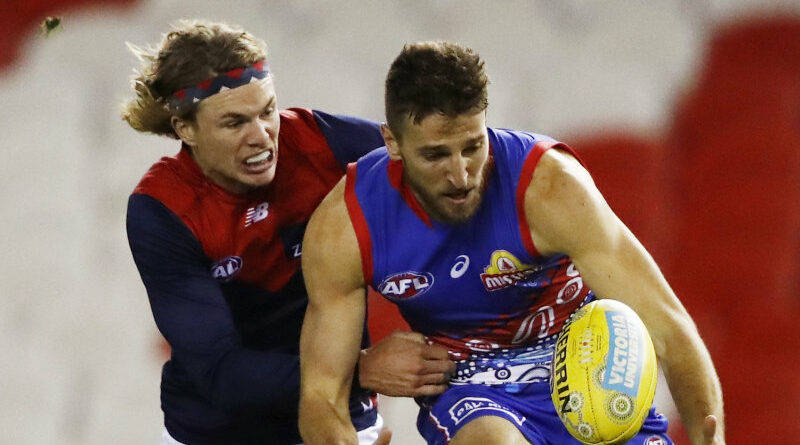 Melbourne have claimed top spot from the Western Bulldogs in a 28-point victory that will have every Demon supporter dreaming premierships.

It was a whole of club win built on the back of players executing a brilliant coaching plan to stifle the Bulldogs’ ball movement that was devised and communicated while the state shutdown in an attempt to quell the latest coronavirus outbreak.

The only thing Melbourne were interested in shutting down however was the Western Bulldogs’ ability to move the ball out of defence and they did so brilliantly forcing the Bulldogs into mistake after mistake as they turned the ball over repeatedly while attempting to switch the play and find an avenue towards goal. 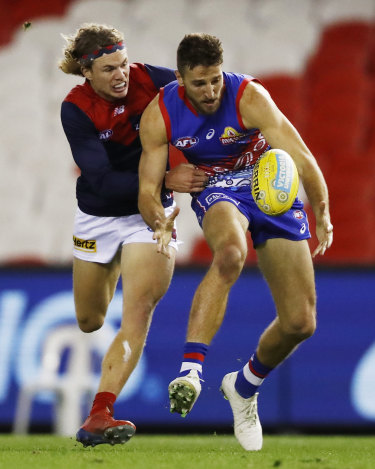 The tactic meant the Bulldogs rarely made deep entries while Melbourne were the complete opposite with Bailey Fritsch, Tom McDonald and then eventually Sam Weideman dominating.

Tim English, who was returning from concussion, was the only threatening forward for the Bulldogs.

It wasn’t the Bulldogs’ forwards fault so much as the lack of drive coming off half-back which meant they were dragged up the ground searching for the ball too often and if they did win it they saw nothing but Melbourne jumpers ahead of them.

The signs for the Bulldogs were ominous early when Melbourne midfielder James Harmes charged away from Tom Liberatore at the first centre clearance to gather a loose ball that his teammates had forced forward and kicked a goal.

It gave Melbourne something to shout about early without a crowd allowed to help them and their intensity didn’t waver for the rest of the quarter as they piled on 6.5 (41) to record their highest first quarter score for the season and put the Western Bulldogs behind at quarter-time for the first time this season.

Melbourne were dominating centre clearances and intercepting attempted switches from the Bulldogs and the ladder leaders became rattled. They did not change their plan but kept aiming for difficult kicks and it did not work with Bailey Dale and Liberatore early culprits.

The Western Bulldogs kept trying to find an answer but the head-scratching continued for the next two quarters as their forward line lost its structure while Steven May, Jake Lever and Harrison Petty remained deep and built a moat the Bulldogs could not cross.

If a crowd had been present they would have groaned at the number of times the Bulldogs hit a dead end and had to back track while Melbourne just kept hunting goals.

In the third quarter the Demons kicked three goals to the Bulldogs nil to put the result beyond doubt despite the game being on the Bulldogs terms. The Bulldogs did not kick their first goal in the second half until 10 minutes into the final term. By then the grand old flag was being sung in every second house in Melbourne.

Melbourne pounces on Liberatore to get off to a flier

Liberatore was directly involved in three early goals to the Demons. Within 30 seconds Harmes, his direct opponent at the opening centre bounce, kicked Melbourne’s first goal after charging forward from the opening bounce.

Christian Petracca kicked Melbourne’s second goal when he gathered a smothered Liberatore kick and snapped accurately across his body. With the pressure building Liberatore then backed Bontempelli to win a one-on-one with a switch kick across the Bulldogs half-back and lost his bet. Bailey Fritsch benefited from the turnover to kick a simple goal and the Demons were away.

Petracca wins the battle with The Bont

Christian Petracca was excellent kicking the Demons second goal and bullocking his way out of the centre on more than one occasion to push the Demons forward after the duo started the match next to each other at the opening bounce. By contrast Bontempelli was quiet being caught holding the ball twice and struggling to find the space in which he causes so much damage.

Making your debut in an empty stadium is not what dreams are made of but Riley Garcia would have been delighted nonetheless. Unfortunately his game ended before quarter-time when he was ruled out of the game when he copped a head knock. Ed Langdon looked to leave the game with an injury late. 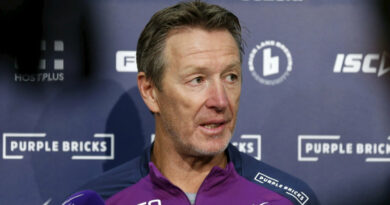 ‘Meetings have been ongoing’: Sharks make shock play for Bellamy