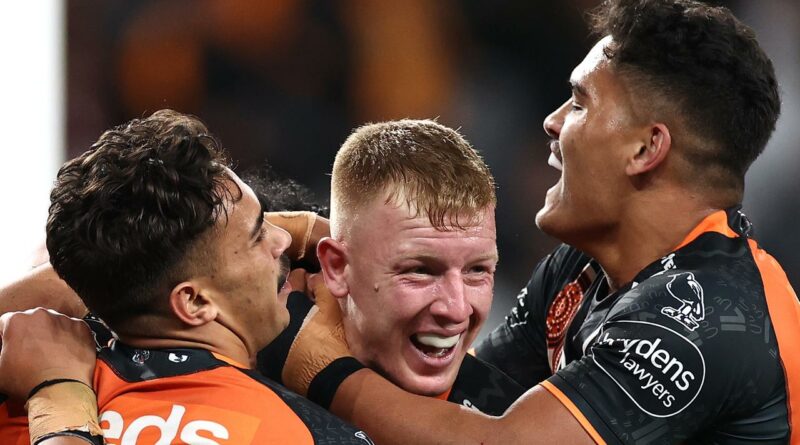 The Wests Tigers must wish they played the Dragons and Knights every week after they chalked up a fourth win against the two clubs to sensationally move within two points of the top eight.

The 34-18 result was the second time this month they’d beaten the Red V, with their fans standing up to cheer them off at halftime just weeks after they vented their frustration in incredible scenes at Bankwest Stadium.

The only problem for Michael Maguire’s side is they are winless in their other eight games ahead of next week’s grudge clash against the unbeaten Panthers at Leichhardt Oval.

Inconsistency has defined their season, but they only have to look at Friday night’s performance for the blueprint needed to stay in the hunt as the teams around them start to slip up.

The Tigers put the razzle dazzle away and instead focused on the physical stuff as they dominated the Dragons through the middle to rack up an extra 400 running metres in a lopsided first half.

Luke Brooks didn’t overplay his hand and was able to work off the platform laid by the tireless Alex Twal, who was ably supported by a fired-up Luciano Leilua playing against his former club, and the magical feet of David Nofoaluma.

In the past seven weeks, the Dragons have only managed to defeat the last-placed Bulldogs. (Photo by Cameron Spencer/Getty Images)Source:Getty Images

The Jet took off and the Laurie truck thundered along as two Tigers speedsters stole the show in Indigenous Round.

It’s been a difficult few years for James Roberts on and off the field, but he repaid the faith on Friday with his first double since early 2019, and just his second try in nearly two years after stints with the Broncos and Rabbitohs.

Playing on the wing for the first time since 2013, Roberts showed no sign of rust from the pectoral injury that had kept him out since Anzac Day, but it’s Laurie who Tigers fans should be most excited about after he backed up to score a classic fullback’s try and then fired a bullet pass to set up Tommy Talau.

The Dragons could finish the week outside the top eight after they slumped to a sixth loss from seven matches to put their season at the crossroads leading into a crunch game at home against the Broncos in Round 13.

Things looked rosy after they roared out of the blocks with four wins in the opening five rounds, but the Red V have fallen off a cliff ever since their upset win over the Eels at Bankwest Stadium.

They returned to the scene of the crime on Friday night but fired blanks in attack as they were totally outplayed through the middle by a Tigers side that hasn’t set the world on fire in 2021. Incredibly, no Dragons forwards cracked triple digits for running metres.

It sets up an intriguing clash next week for Anthony Griffin whose honeymoon period is over and now faces a stern test against the club that handed him his coaching debut.

What time does State of Origin start?