Latrell Mitchell has revealed details of another vile racial vilifaction incident which occurred in front of his Roosters teammates two years ago.

Mitchell has put racism in Australian sport back in the public eye after calling out a hateful message he received on social media. 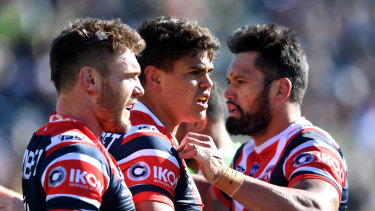 Latrell Mitchell is taking a stand against racism.Credit:AAP

"There are a lot of things that need to happen but we’re a long way from fixing that."

Cooper Cronk may not have been one of Mitchell's teammates at the time of the Leichhardt Oval incident but he spoke with awe when asked about the way the 22-year-old approached the racial abuse incident prior to the Roosters’ thumping win over the Warriors on Sunday.

"Latrell has been through some difficult stages at different stages in his career but obviously the past week has been a big mental, emotional, physical battle for him," Cronk said.

"What I will say on it is that no person in the rugby league community deserves to feel vilified in any way, shape or form.

"If anyone does, then the game needs to stand up and protect its people. The game isn't a game without its people and the community has done a good job in supporting Blake (Ferguson), Latrell and anyone else in different situations and we will continue to do that.

"This club here does a tremendous job for its players and its people and Latrell – off a tough week – showed his class in the way he played and the way he responded to all the media attention and things like that.

Mitchell doesn't believe a ban from all NRL matches for the man who abused him via Facebook is enough of a punishment.

He would rather see offenders educated about the impact such comments have on the Indigenous community. 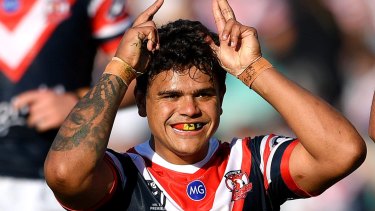 Latrell Mitchell after scoring against the Warriors.Credit:NRL Photos

"Getting rubbed out of the game and not being able to come and get a ticket and go into a stadium … I don’t think that’s going to bother him," Mitchell said.

"People need to be educated about … if they’re going to say something, they need to be accountable for what they put out there.

"To put it on social media and for me to go share it, I’m not going to scribble your name out."

Mitchell hopes his actions will spark change and made an effort to thank those who had reached out in the last week to offer their support.

"It was overwhelming. The non-Indigenous community were probably the most supportive," he said.

"It was awesome to see. To take the conversation and say you know what, I stand with Latrell … I really appreciate that.

"It just needs to stop and to be out of our game."

Colin Kaepernick defends Minnesota protests after death of George Floyd: ‘We have the right to fight back!’