A teenage Canterbury Bulldogs prospect was "destined for big things", according to Anthony Mundine, who had been mentoring the emerging forward before his sudden death over the weekend.

Ziggie Vincent, 19, was a promising back-rower from a small town near Lake Cargelligo, NSW, who had been training with the Bulldogs in pursuit of a contract. 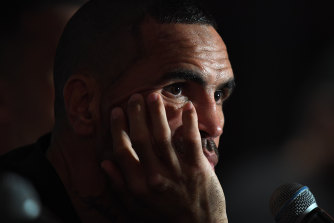 Mundine was alerted to him by friends in nearby Griffith, where he has family connections, and put him in touch with player manager Mario Tartak, who organised his opportunity at the Bulldogs.

Mundine became a mentor to Vincent, who was staying in a granny flat behind his mother's house in Sydney, and the veteran boxer and former rugby league player was convinced an NRL debut was just around the corner.

Vincent passed away over the weekend in Batemans Bay and Mundine said he had taken his own life.

"I never really saw it coming – I always used to tell him, anything you need, anything you want to talk about, I'm here for you bro," Mundine said.

"As soon as I saw [his highlights], man, I knew this guy was destined for big things. He scored an individual try that I've never seen a back-rower score, with that explosive power, that speed. This is like a 40, 50-metre break and run, busted the line.

"No question in my mind, first 10 rounds he would have been making his first-grade debut. Easy. Easy."

The Bulldogs released a statement on Monday expressing their "deepest sympathies to the family and friends" of Vincent.

"Although Ziggie was only around the club for six weeks as a triallist for our Jersey Flegg side he had made a great impression on all those that had met him and had made some close friends in and around the club," the Canterbury statement said.

"His passing has come as a major shock to everyone at the club and we offer our condolences and deepest sympathies to his family and friends. All Bulldogs players and staff have been offered counselling at this difficult time."

"People care," he said. "We're losing too many young fellas to this suicide stuff. We've got to lead these kids in the right direction.

"You have to talk to someone, get it off your chest. You can't bottle it up because it'll want to explode at some point.

"Everybody's got someone that loves them. I only just met him in the last six months. Maybe I didn't have that connection that other people close to him would have.

"There's always people to turn to, it's just giving them the right encouragement to do that."

Cronk promises to ‘stand up for himself’ as Smith rivalry resumes