Carlton have declared Marc Murphy a certain starter for Thursday night's JLT Community Series opener with the former skipper showing no signs of a knee problem.

Murphy had appeared to hurt himself in a practice match against Hawthorn on Thursday and left the ground late to have the knee iced. But the hard-running midfielder trained on Friday and Monday and is set to line up against Essendon at Ikon Park. 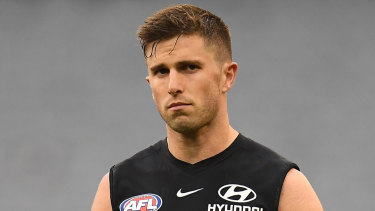 Marc Murphy will line up against the Bombers this Thursday.Credit:AAP

“Marc Murphy came off the ground late in the game against Hawthorn,” he said.

“He trained fully the next day and did a full training session [on Monday]. He’s ready to go this week – there were no issues whatsoever with him.”

Murphy was restricted to 13 games last season because of injury and the Blues will need his drive and experience if they are to vault from the foot of the ladder.

Veteran ruckman Matthew Kreuzer continues to lift his training workload, having had knee surgery in January. He appears likely to miss the JLT series but is expected to be available for selection come the home-and-away season opener against Richmond on March 21.

“‘Kreuz’ is training really well. He did the full skills session [on Monday],” Russell said.

“He’s just getting a few weeks of good training in and we expect him to be available certainly by round one. He’s looking good to play before then.”

Former Collingwood forward Alex Fasolo made an inauspicious start at his new home, having suffered a small fracture to his arm on Australia Day when he tripped on a gutter and fell while play-wrestling with friends outside a party in Richmond.

The injury required a brace but that has been removed in recent weeks. He is still a fortnight from being cleared to play but he could yet return in the Blues' second – and final – JLT clash, against the Magpies in Morwell on March 11.

"Alex Fasolo’s arm is settling down really well. He has been doing skills training for the last week, no contact, and did a full skills session yesterday," Russell said.

“He’s about four weeks after the injury and, at the six-week mark, he’ll be available to play. We’re really pleased with how he’s going, he hasn’t missed anything and he’s done a heap of running and conditioning work. We expect him to be in really good shape when he plays. He’s all set to play by round one."

Fasolo has been brought in to add potency inside attacking 50, with the Blues desperate to score more this season.

Forward Mitch McGovern, who had hurt his back through the pre-season, played half a game against the Hawks but is set to log more minutes against the Bombers.

Defenders Harrison Macreadie (back), Caleb Marchbank (back) and Tom Williamson (back) are still on the mend. They are not due back before round one, although Macreadie and Marchbank are expected to return sooner than Williamson, who Russell said had been "a fraction slower" in his comeback.

Pendlebury wants to play under next captain