Brent Naden didn't play a minute against South Sydney at the weekend but has been listed to start at centre for Penrith in Sunday's grand final.

Naden's place in the starting team was under scrutiny after Tyrone May's commendable job in the preliminary final victory against Souths. 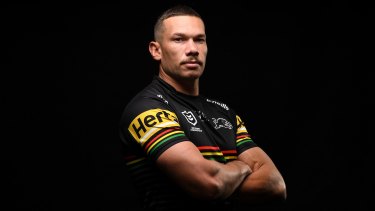 Brent Naden has been mamed to start in the centres for Sunday’s grand final.Credit:NRL Photos

But coach Ivan Cleary has stuck solid with Naden, who has started every game since round seven. May will revert to the bench and gives Cleary plenty of versatility.

Naden told the Herald this week: “I’ve got one more week to prove to Ivan that I’m capable of playing in that team. But if he wants to put me on the bench or not play me, that’s his decision. I’ll stand by it.”

However, the 24-year-old will need to improve his defence, especially against the Storm and their lethal left-edge featuring Justin Olam and Josh Addo-Carr.

Penrith cult hero Viliame Kikau returns to the back row after a one-match suspension. Kurt Capewell also drops back to the interchange. 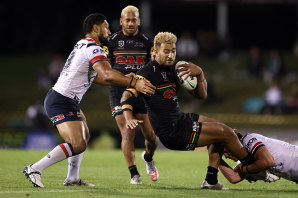 Viliame Kikau will return from suspension for the grand final.Credit:Getty Images

Mitch Kenny was given game time against Souths but has been named in the No.18 jersey. Api Koroisau suffered a ''stinger'' on Saturday but has declared he will be fit, meaning Kenny is unlikely to be required. May can also cover at dummy-half.

Young local forward Spencer Leniu missed last weekend due to illness and has been named on an extended bench but, like Kenny, looks certain to watch the action from the ANZ Stadium sideline.

The Panthers are due to have their first field session on Tuesday afternoon in front of a handful of fans at Panthers Stadium.

GI blow: Souths would have to absorb $1.5m in cap if Inglis can’t go on

Wayne Bennett hits back at claims he has disrespected Great Britain