Panthers coach Ivan Cleary has tapped Viliame Kikau to lead the Panthers through one of their most challenging weeks, as the club looks to keep their undefeated streak alive without seven of their senior players.

With Brian To’o, Liam Martin, Jarome Luai, Nathan Cleary, Isaah Yeo, Apisai Koroisau and Kurt Capewell all out with Origin duty, Kikau was pulled aside by the head coach on Monday. 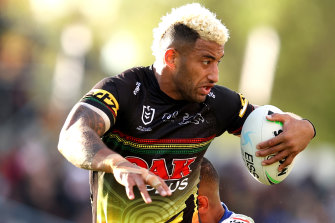 Panthers enforcer Viliame Kikau will take on a leadership role this week with Origin players out.Credit:Getty

“We are going to train the same and perform the same out here because we’ve got that culture. No excuses, next man up. If you get that spot just make sure you do your job for the team.”

Kikau has been given the task of steering them around the paddock in what will be a test of the club’s depth.

“It’s going to be a challenge,” Kikau said. “[The Tigers] will come out firing to try and break the streak. But we will do our best to keep the streak going. All of the boys who have been playing those lower grades are just killing it.”

In a boost for the Panthers, Dylan Edwards will return at fullback from a hamstring injury with Stephen Crichton shifting back to the centres.

Kikau will be joined by Scott Sorensen and Matt Eisenhuth in the back row while Brian To’o is replaced on the wing by Robert Jennings. Mitch Kenny will replace Koroisau at No.9.

Despite the lack of numbers, Edwards said the number of Panthers selected in Origin shows how well the club is going.

“You always look at Melbourne. They’ve always have that amount of boys [in Origin] and they’ve been a dominant club for a long time,” he said. “For us to have as many boys as we do means we are going alright.”

On Wednesday, Panthers chief executive Brian Fletcher spoke about the growth of the club on SEN radio and the need for an upgrade to Penrith’s home ground.

Fletcher also agreed with his head coach, who spoke about the need for the NRL to consider a system that allows player bonuses to be removed from the salary cap to reward rather than punish clubs who develop the best players.

“When you do all the developing with that amount of juniors and we develop them right through and spend a lot of money on them,” he said.

“The prime example is Matty Burton, forget about the Origin side of it, but Matty Burton who we develop right through and then Canterbury come along and offer him a great package to go over there, but not one dollar comes back to Panthers for the development and he started here when he was 16 years of age.” 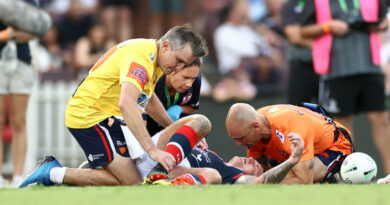 Lussick in line for Roosters as Robinson watches Suaalii up close