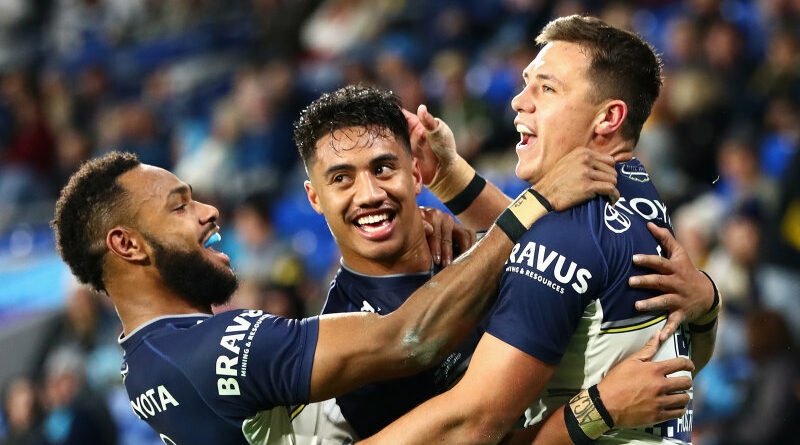 North Queensland haven’t fallen victim to their own success, negotiating the absence of their Queensland State of Origin stars to heap more misery on Gold Coast.

But Todd Payten’s improved side showed their depth and didn’t lose any defensive bite, withstanding the Titans’ early blows to win 32-6.

Victory improved them to 9-4 to ensure their top-four status remains, while the sorry Titans (3-10) could finish the weekend equal last.

Compounding problems, enterprising fullback Jayden Campbell limped off in the second half clutching at his hamstring.

Toby Sexton opened the scoring and, after 27 minutes, it was all going so well for the hosts.

But then the halfback kicked the ball out on the full. 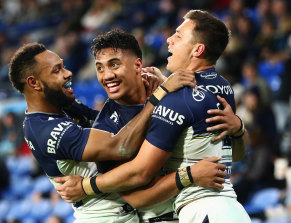 Murray Tuilagi (centre) celebrates his first-half try against the Titans.Credit:Getty

In a flash Heilum Luki had crossed, twisting through two tackles and reaching out impressively for the leveller.

They weren’t done, Jamayne Isaako’s loose carry costing him when the ball spilt to Hamiso Tabuai-Fidow, who kicked ahead into open space to himself for an easy try.

In eight minutes they’d built a 16-6 lead and went to the sheds, after an opening 27 minutes of out-and-out defence, in complete control.

Titans captain Tino Fa’asuamaleaui, in the stands watching on with the Queensland team, had his head in his hands but his men steadied to begin the second half.

Tanah Boyd was stopped just short of the line as they probed for a way back into the contest.

But their expedition reaped nothing, the Cowboys’ defence with all the answers as Jason Taumalolo (184 run metres, 24 tackles) added some grunt in his return from a knee injury.

Eventually the Cowboys got their chance and the impressive Reece Robson jumped from dummy-half and found plenty of space between Titans defenders.

Tabuai-Fidow had a double when he ran down a pinpoint Scott Drinkwater grubber aimed at the corner post before centre Peta Hiku grabbed a late try to complete the rout.

With Fa’asuamaleaui missing, no Titans forward ran for more than 121 metres, while Cowboys fullback Drinkwater had 193 run metres and three line-break assists.

Believe it or not: ‘Coach whisperer’ Bradley Charles Stubbs shares his secrets