Home » Rugby League » ‘No one can replace Lance’: Buddy to miss three weeks with broken finger

Lance Franklin is set for surgery on his broken finger but the Sydney Swans have avoided a worst-case outcome, with the veteran forward only expected to miss up to three weeks.

Franklin was due to meet a specialist on Monday afternoon, with coach John Longmire revealing he was likely to have a minor operation on the finger he injured during Saturday’s 11-point win over North Melbourne. 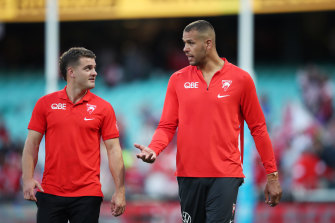 Lance Franklin’s broken finger has forced him to the sidelines – alongside injured Swans teammate Tom Papley.Credit:Getty

The expectation is it will sideline the 35-year-old for two or three games, meaning he could return for Sydney’s round seven clash at home to Brisbane or the following week against Gold Coast.

There is potentially even a silver lining in that diagnosis for Franklin, who has played every game so far this year but was likely to be rested at some point soon due to the Swans’ meticulous management of his physical loads.

“First and foremost is [to] allow the wound to heal post the operation and then once that’s healed, he’ll be able to have a good training block, get his speed stuff in,” Longmire said. “He can still run, so he can get some good strength work in, some good speed work in, and hopefully be really sharp when he returns.”

Logan McDonald and Joel Amartey, who both performed strongly for the Swans’ VFL team, are in contention to come in for Franklin for Friday night’s meeting with a resurgent West Coast at Optus Stadium.

“We feel like we’ve got some options there if we need to – obviously no one [can] replace Lance, we don’t expect that, but to come in and play that key forward role is still an important role for us,” Longmire said.

Paddy McCartin, who had a minor head knock against the Kangaroos, has also been cleared of any injury or concussion, but small forward Tom Papley has been ruled out for yet another week – leaving Sydney without two of their best goalkickers for their first trip west this year.

Papley tore his hamstring in pre-season and was originally expected to miss the first few weeks of Sydney’s AFL campaign but could still be at least another fortnight away from returning from what Longmire described as a “significant” injury.

“He’s been training now for a few weeks but only at 80 per cent pace, so he hasn’t gone to that next level, which we expect him to do this week and next week,” he said.

“Hopefully [he can get in] a couple of weeks of really hard training for him before we’re able to pick him. There hasn’t been any setbacks, it’s just been conservative in regards to the impact of full-speed running. He’s clearly a critical player for us so it’ll be great to get him back but it certainly won’t be this week.”

The injury-ravaged Eagles, who so far are the only AFL team which has been forced to use top-up players due to COVID-19 cases within their squad, posted a strong 13-point win over Collingwood over the weekend.

They suffered yet another setback, however, on Monday as star ruckman Nic Naitanui was ruled out until mid-season with a medial ligament injury, although Longmire was taking no solace from his absence – particularly with Luke Shuey, Elliot Yeo, Tim Kelly anticipated to return this week.

“They were fantastic on the weekend, and to be honest if you look at their season it’s been pretty good considering some of the challenges they’ve faced,” he said. “They’ve done a really good job, they’ve shown some remarkable resilience, and their best players played really well on the weekend – the ones we know are absolute top of the tree, and the West Coast have got a few of them.”