Home » Rugby League » ‘Not playing without a crowd’: Fly-in, fly-out travel on the cards if decider relocated

Penrith and South Sydney may be required to fly-in, fly-out on grand final day if fresh COVID-19 outbreaks force the game’s showpiece event to relocate from Brisbane to Townsville at the last minute.

Thousands of ticket-holders will be locked out of Suncorp Stadium after Queensland Public Health Orders reduced capacity to 75 per cent for the NRL showpiece, meaning only 39,000 fans can attend. However, there are fears the game could be shifted from Brisbane altogether if more cases are detected through south-east Queensland.

NRL chief executive Andrew Abdo has publicly stated that a final decision on where the game will be played must be made by close of business on Friday, although sources with knowledge of the situation believe that deadline could now be extended to Saturday.

There are few impediments to a later shift from a broadcast perspective given Nine – the publishers of this masthead – have contingency plans in place. An outside broadcast truck has already been sent to Townsville, while the show will be hosted from studios at North Sydney. The sideline commentators – including Johnathan Thurston, Cameron Smith and Emma Lawrence – could fly in on the day of the game if required.

The NRL, which is beholden to the Queensland government’s health advice, won’t be out of pocket regardless of whether the match is played with or without spectators at Suncorp or Queensland Country Bank Stadium. The Australian reported that the government is liable for any losses under the terms of the deal struck with Rugby League Central, which requires them to make up the difference should gate takings diminish as a result of playing at a smaller venue, or with a less than capacity crowd. 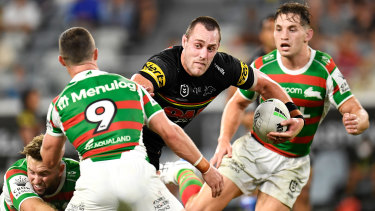 The Rabbitohs and panthers played in Townsville in the first week of the finals – and could be forced to play the grand final there on Sunday.Credit:Getty

Regardless, the NRL is desperate for as many fans as possible to be present for the showpiece event.

“We are not going to play without a crowd,” ARLC chairman Peter V’landys said. “For us, it’s all about the atmosphere. It’s a grand final, it’s a major event and we have a number of contingency plans.

“You can never predict with any certainty with COVID, but at this stage the government is confident we can proceed with 75 per cent [crowds]. We move ahead accordingly.”

A late shift to Townsville will be a logistical nightmare for the NRL. Suncorp ticket holders would need to be refunded, while about 19,000 tickets to Queensland Country Bank Stadium would need to be sold at short notice.

However, Cowboys legend Thurston – one of the men who campaigned for the venue to be built – is confident the locals would jump at the opportunity to witness history.

“If the Queensland government and NRL decide the grand final needs to be played in Townsville, I know the league-loving community up here will jump at the chance to get behind the Panthers and Rabbitohs,” Thurston said.

“We will give them a big Townsville welcome and create an atmosphere second to none.”

NRL players are no strangers to fly-in, fly out scenarios. Souths and Penrith travelled to and from Townsville on game day for their qualifying final during earlier this month.

Abdo said the fans who were last to buy their tickets to the Suncorp clash would be the ones who missed out.

“We had two allocations of grand final tickets; the first was to the general public and the second was aimed at fans of both grand final teams,” Abdo said.

“The fairest way to determine who can attend the game is by prioritising the first 75 per cent to purchase tickets in each allocation. Any fan who no longer wants to attend will also be able to access a refund.

“I want to acknowledge fans who will now miss out on attending the grand final. I know you had been counting down the days to a once-in-a-lifetime experience and this will be difficult news to take, but this decision is out of our hands.”