The Brisbane Lions are weighing up whether to fight Jarrod Berry’s one-match ban after the robust tagger was suspended from next Friday night’s preliminary final against Geelong.

Berry was found to have made unreasonable or unnecessary contact to the eye region of Melbourne’s Clayton Oliver in Friday night’s semi-final at the MCG. 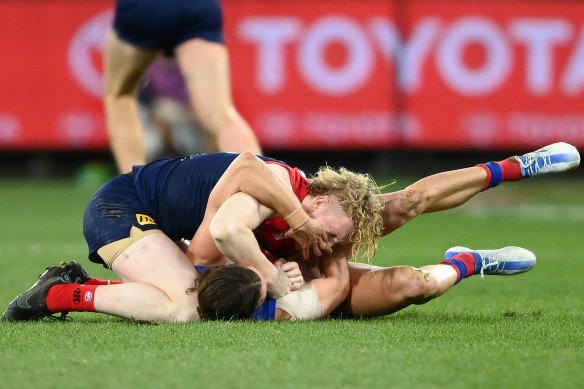 Jarrod Berry and Clayton Oliver scuffle in the third term on Friday night.Credit:Getty

Match review officer Michael Christian released his report on Saturday, finding Berry was guilty of intentional conduct, resulting in high contact but low impact, thereby earning a one-match ban without any leniency for an early guilty plea. The Lions, on Saturday night, were weighing up their next move.

Berry had been adamant there was “nothing purposeful” in his contact with Oliver’s face in the third term. He played a key role in the Lions’ come-from-behind 14.8 (92) to 11.13 (79) upset of the Demons, which set up a preliminary final date with the Cats.

The pair tangled in the middle of the MCG after Berry tackled Oliver to the ground, and Berry at one point appeared to make hand contact with Oliver’s face.

Oliver made a complaint to an umpire moments later, pointing towards his eyes in the process.
Speaking on Fox Footy post-match, Berry said the incident was “just a little scuffle” and “part of the contest”.

Berry was on the receiving end of a similar incident last year, when Fremantle midfielder Andrew Brayshaw received a one-match suspension for intentionally making “unnecessary or unreasonable contact” to the Lion’s eye region.

Brisbane will be hoping they can avoid another September suspension after Cam Rayner and Noah Answerth were both banned from playing in the qualifying final.

Berry proved his value in a tight-checking role against Oliver in the second half on Friday night after Deven Robertson had started on the Melbourne champion.

Berry limited Oliver to seven disposals after halftime and had 22 of his own as the Lions ran over the top of their opponents.

Brisbane coach Chris Fagan later revealed Berry had requested the defensive role days earlier, only to be told Robertson would get the first crack.

But Lions assistant coach Cameron Bruce demanded Berry be moved onto Oliver at the main break after the Demons midfielder had a big say in first-half proceedings.

“It was a very, very important move and I won’t take credit for that one because Cam Bruce suggested it at halftime, forcefully, and I took his advice,” Fagan said.

“It ended up being a great move because Berry was fantastic for us.”

Veteran defender Daniel Rich said the Lions were ready to welcome Joe Daniher back, the star forward a late withdrawal on Friday morning when wife Adelle went into labour.

“He has done a lot for our footy club in a short amount of time. I am pretty happy for him and Adelle, that they can welcome someone into the world. It will be good to have him back next week,” Rich said.

In what Rich said was a “pretty well rounded” team effort, the win was the Lions’ first at the MCG since 2014, and their first finals win at the venue since 2004.

“It’s, obviously, spoken about a lot but we have always had the belief. The boys played so well here against the Tigers, it showed everyone that we can play good footy here, can get the job done,” Rich said.

“I think it definitely adds to that belief, get it done in a big game, so we are excited about what’s to come.”

Aside from Daniher, the Lions have other selection issues to address. Ruckman Oscar McInerney missed Friday night but, should he be cleared of concussion, could squeeze out Darcy Fort, who played well as his replacement. 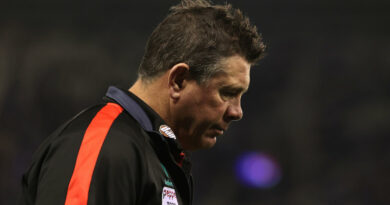