The Wests Tigers are inching closer to landing a man mountain who could help fill the void left by Ben Matulino's retirement after the NRL cleared Zane Musgrove to start training with the joint venture.

Just a day after they sensationally withdrew an offer to Latrell Mitchell, the Tigers are on the cusp of adding some more grunt to their forward pack amid a huge roster overhaul. 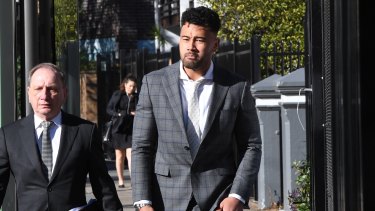 Zane Musgrove has been cleared to return to NRL training with the Wests Tigers.Credit:AAP

But it is satisfied he can return to training to ensure the club is not disadvantaged while the assessment takes place.

Sources familiar with Musgrove's planned return to the NRL said the 23-year-old is only likely to be offered a minimum wage deal as the Tigers seek to register a contract for next year.

The club has requested he only partake in pre-season training at their Concord Oval headquarters and not take part in any official functions away from the venue.

New Zealand coach Maguire has been pivotal in Musgrove's welfare over the past year after initially trying to lure him to the club shortly after being announced as Ivan Cleary's successor.

Musgrove made his NRL debut under Maguire at the Rabbitohs in 2016.

Maguire is preparing to wheel out a new-look forward pack next year which will also include Dragons back-rower Luciano Leilua after the retirement of Matulino and Ryan Matterson's release to join the Eels.

Parramatta is blocking a bid from Tigers-bound teenage behemoth Stefano Utoikamanu to join Maguire's squad next year despite the 19-year-old wanting to switch clubs immediately. He has already signed a three-year deal with the Tigers from 2021.

The club, which still has more than $1 million to spend in next year's salary cap, made an aggressive pitch for out-of-favour Kangaroos and Roosters star Mitchell to join the Tigers, but grew frustrated with the stalled negotiations and withdrew a three-year deal from 2021 on Thursday.

The Tigers have been one of the most active clubs in the player market over the silly season and already released Esan Marsters to join the Cowboys.

4 points: Time for Carlton’s players to look in the mirror