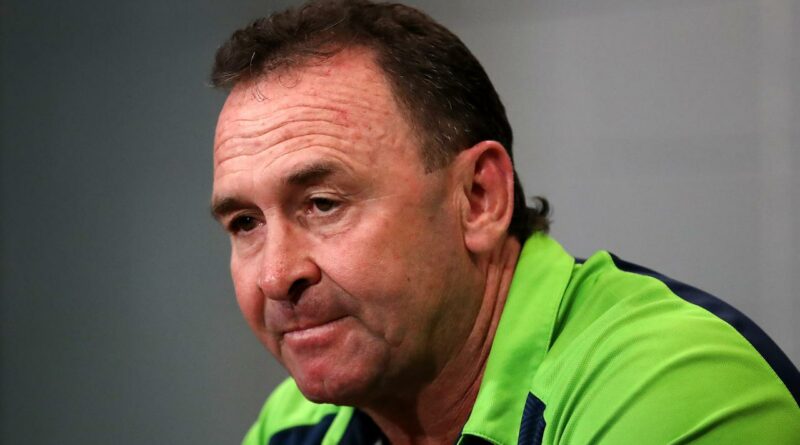 Canberra Raiders coach Ricky Stuart is reportedly under investigation for a sideline incident during Saturday afternoon’s NRL game against the Warriors.

The Kiwi side claimed a thrilling 34-31 victory at GIO Stadium, scoring a try at the death before saving one with seconds remaining to hold onto a three-point win.

It was statistically the biggest comeback for the Warriors in NRL history, with the New Zealand team coming back from a 31-10 deficit at the 50-minute mark.

But Stuart was visably irate about something — most likely a dubious refereeing decision that saw the Warriors score a second-half try despite a blatant forward pass.

Match footage shows the 54-year-old throwing his arms in the air from the sidelines after Ben Murdoch-Masila’s controversial four-pointer.

“I didn’t go anywhere near him or say anything to him,” Stuart told the NewsCorp publication.

“Like 13 and a half thousand other people I was singing out and venting my frustration but it was not directed at any individual.”

According to the report, the NRL match review committee is checking video and audio footage before coming to a verdict.

Speaking to reporters after Saturday’s loss, Stuart fired off a 33-second rant before walking out of the press conference.

“I come in here because it’s my job,” Stuart said. “I respect the fact that you (journalists) have got a job and I’ve got $20,000 hanging over my head.

Canberra will next face the Gold Coast Titans at Cbus Super Stadium on Saturday evening.

Nervous wait worth it for Reds centre