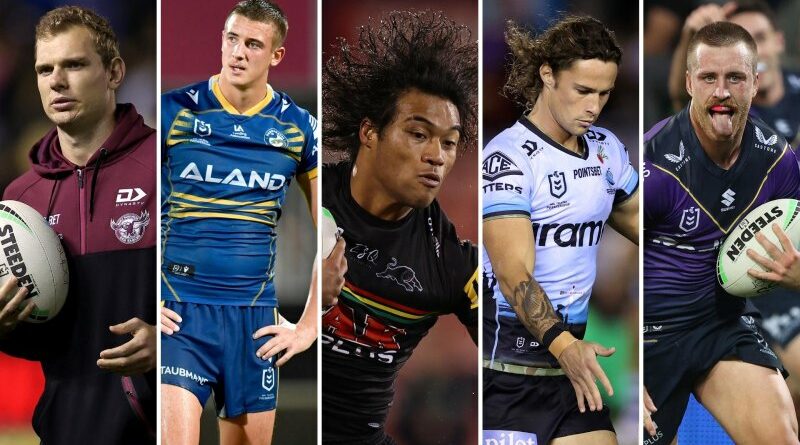 This one is all about the Adam Reynolds show. The Rabbitohs legend missed the round-one clash against his former club because of COVID, but will need little motivation to produce a big game.

The Broncos have played well on the back of some Reynolds magic, but they do lose two of their best forwards with Kurt Capewell and Payne Haas. Souths completed well against a 12-man Manly, and welcome back Taane Milne who was named on an extended bench and could yet replace impressive rookie Isaiah Tass in the centres. Rabbitohs by 8

The Raiders celebrate their Old Boys’ Day and will have zero excuses to come out flat against the Dogs. Canterbury are riding high after their gutsy 16-12 triumph over the Sydney Roosters, but the Roosters were disappointing in attack and threw little at them. Matt Burton is sure to cause plenty of headaches with his monster boot. Jarrod Croker is back in the centres and will offer some experience and calmness when needed, while Adam Elliott will be another player looking to produce a season-best game against his former club. Raiders by 10.
Christian Nicolussi 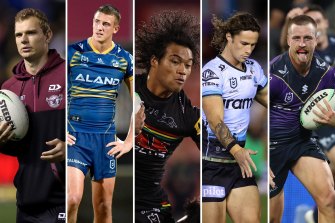 Remember last time they met in the trials? We thought the premiership hangover was going to be real, with the Eels running amok in a 36-0 rout. Eight rounds in and the Panthers haven’t really looked like being beaten, and edged Parramatta in a gripping finals clash en route to the premiership last year. It was the last of four straight wins Ivan Cleary and co have had over the Eels. Brian To’o and Moses Leota are on an extended reserves list as they close in on comebacks for the Panthers. Brad Arthur has taken son Jake out of the firing line and returned Dylan Brown to five-eighth after the loss to the Cowboys, with Tom Opacic back in the centres. Panthers by 14.
Adam Pengilly

Tom Trbojevic is back, as is Josh Aloiai and Haumole Olakau’atu in a huge triple boost for the home side. There will be plenty of northern beaches love with Tom and his brothers Jake and Ben all named in the starting team together for the first time. The Sea Eagles were brave against Souths with 12 men, and deserved to throw in the towel a lot earlier than they did. Olakau’atu’s right-edge combination with Daly Cherry-Evans will test the Tigers. The Tigers have played with plenty of spirit, but they will not have the points in them to beat the Sea Eagles, especially with ‘Turbo’ organising the defence. This was a mismatch when the two teams met in the trials, and on a dry deck it could get ugly again. Sea Eagles by 14.
Christian Nicolussi

What is going on at the Roosters? Many tipped them as premiership favourites, but they have looked anything but contenders after losses to the Dragons and Bulldogs. The Tricolours had ample opportunities to finish off the blue and whites, but the halves pairing of Luke Keary and Sam Walker are playing too much the same. It’s up to Keary to take control, a point made by James Tedesco prior to last weekend’s shock loss. Coach Trent Robinson has a knack for getting his team to build into a season, but they can’t afford to drop many more games, particularly not this one. The Gold Coast, meanwhile, have been the other of last year’s finalists to have disappointed so far. They showed some spirit against Penrith without ever giving the impression an upset was possible. The loser of this one will be in dire straits. Roosters by 12.
Adrian Proszenko

Not many people thought we’d be writing this at the start of the season but it’s time to sit up and take notice of the Cowboys. The most-improved team in the NRL get a night at home against a struggling opponent in the Knights and are very warm favourites to notch up their sixth win of the season. Spare us the ‘soft draw’ argument. The Cowboys have simply been getting it done and playing extremely well along the way. As for the Knights, what may have looked like a very winnable match two months ago now shapes as another extreme test. They have been roundly smashed over the past fortnight and it would be no surprise if the Cowboys joined the stampede. Cowboys by 20.
Phil Lutton

It’s been a good rebound by the Dragons over the past three weeks. Wins against the Knights, Roosters and Dragons have raised hopes of a finals charge, but this is an altogether different proposition. Melbourne have been in sublime form, making short work of everyone since their loss to Parramatta. Everyone is looking ahead to their next game, against the Panthers, but the Storm could get a shock if they take the Red V lightly. Anthony Griffin is still working out the best way to utilise the young and experienced halves at his disposal and if he gets it right the Dragons could surprise a few teams. A win here, however, would be a complete shock. With Ryan Papenhuyzen, Cameron Munster, Jahrome Hughes and Harry Grant running riot, the Storm should do this comfortably. Melbourne by 18.
Adrian Proszenko

The Sharks are coming off their worst performance of the year, and the Warriors off a game which would have been a contender for worst of the year if not for the Titans-Tigers abomination. Dale Finucane is poised to make his return from a minor calf problem and concussion break to start in Cronulla’s pack, with Wade Graham to play just his second game of the season off the bench. Nicho Hynes lumped the loss to the Broncos on his shoulders and has starred at his new home this season. Expect a reaction. Somehow, the Warriors are 4-4 after eight rounds and Nathan Brown would be ecstatic with their ladder position. Dallin Watene-Zelezniak (concussion) returns after that nasty incident in the 70-10 loss to the Storm. Cronulla have won eight of their last 10 matches against the Warriors. Sharks by 12.
Adam Pengilly

Why David Gallop is unlikely to ever buy Todd Greenberg lunch