Home » Rugby League » NRL will survive – but not as we know it, says V’landys

The NRL will survive, but not as we know it.

That was the message from ARL chairman Peter V'landys and NRL chief executive Todd Greenberg after the NRL was forced to suspend its season after two rounds. 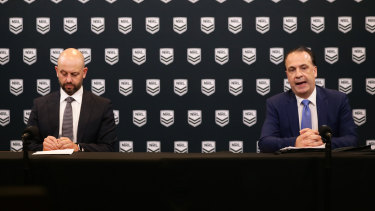 The NRL had planned to play round three matches as late as Monday morning. Hours later, it was announced the competition would be indefinitely suspended.

"It is a deeply sad day but one of the most responsible days in our game's history," NRL chief Todd Greenberg said. "We would not have reached this point unless the conditions had shifted so dramatically and so exponentially.

"Today is a difficult day for the rugby league community, both here at head office and across all our clubs and players.

"Our priority is to do everything we can to give our game the best chance for a long and sustainable future. We have briefed all of our clubs this evening and all of our players have now been told."

V'landys isn't sure what state the competition will return in.

"Rugby league will survive in some way. I can't guarantee it will be in the same way it is at the moment. No one knows. No one knows how long this pandemic is going to last.

"We're ready for the worst and we are going to look at dealing with the worst. That's exactly what we will do in the next couple of weeks."

NRL teams had played behind closed doors in the second round of the season and the administration explored radical alternatives, such as shifting the entire competition to a remote town in Queensland, in an effort for it to continue and for the broadcast rights revenue to keep rolling in.

For now, V'landys isn't clear as to whether that will roll in again, as games will not be played on April 1, when the next dose of quarterly revenue which keeps the game afloat was due to arrive.

"We have been in dialogue with our broadcast partners. They've been great to date. "It isn't as bad as what we could expect but until we sit down it's too premature to stay exactly what will happen."

V’landys maintained that the clubs faced a “catastrophic” few months as the game tries to keep its head above water without the latest quarterly payment of the $1.8 billion, five-year television deal.

"It's catastrophic. I don't think we've ever come across a financial crisis like this. We're all affected, as Todd pointed out," V'landys said. "We've led by example by cutting our expenditure immediately and we are hoping the clubs will do the same very quickly.

"We will sit down with the clubs over the next week to look at how they're affected. This is a financial crisis. You can't understate it. It's probably the biggest financial crisis the game will ever face in its history.

"But, cooperatively and united, we will deal with it and hopefully we will come out the other end."

The news that the competition was being put on hold came on another eventful day at League Central in which many staff were told to take annual leave until May 1.

Giants stride towards finals with away win over Crows