The mark of the year judges will have a tough time picking the winner come season’s end, after Hawthorn’s Tim O’Brien added yet another screamer to the 2021 list.

O’Brien’s horizontal flyer comes off the back of Shai Bolton jumping higher than the MCG light towers earlier in the season, and his teammate Jack Riewoldt taking a stunning reverse speckie in Sydney. 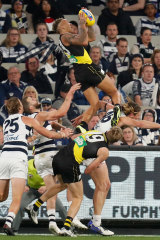 “I didn’t just vote for Jack’s the best because he’s a fellow Tasmanian,” Howe says. “They’re all impressive in themselves. There’s pretty much nothing between them. But that would be my vote if I had to pick.”

On O’Brien’s mark, Howe said: “Until you see it on close up you realise how high he gets. The only person who probably isn’t impressed with it is Luke Breust.

“He’s going against the grain of the ball flight and he got a fair ride. He took it in his hands as well which adds to the degree of difficulty.”

Howe also said he had been high and then falling parallel to the ground like O’Brien was once before, his mark for Melbourne against Port Adelaide in Darwin in 2012.

“It was good O’Brien held onto it because generally if you get into a vulnerable spot like that you start looking for the ground and the first thing you do is let go of the ball to protect yourself, which is natural,” Howe says.

Riewoldt’s mark, to him, was the best because the ball was coming from essentially directly behind him.

“He gets a boost, manages to hold onto it and does a 180 coming down with it. It’s the mark that has got it all. He does well to make a contest let alone pull it done. Height, courage and cleanliness.”

“In terms of height he takes the cake comfortably … that was a ridiculous grab in itself because of the secondary boost which sends him almost twice the height.

“You could almost see it happen in slo-mo because he set himself for it.”

There was a mention from Howe for Brody Mihocek’s mark against North Melbourne too.

“He has been burning my ears about it. One of the first hangers he has taken in his life … he is usually a battering ram. It’s a really good grab. Clean, tidy.”

Smith’s towering grab for Melbourne against Brisbane in round 22, 1995 is considered one of the most awesome marks of all time.

“Tim’s was a ripper … the angle he went in on, he seemed to be flying through the air because he was parallel with the ground.”

“The degree of difficulty running back and taking the specie backwards is higher.“

The height of Bolton’s mark shocked Smith most, along with the way Riewoldt controlled the ball all the way down.

How mark of the year is decided

The mark of the year is selected via a mix of public and expert voting.

One mark is nominated for mark of the year each round. That mark is decided by a fan vote.

After the season the AFL Game Analysis Committee selects the three best marks from the 23 round winners, plus five more selected by AFL Media. This determines the three finalist marks.

(One member still to be added)

“Bolton would have thought he had it wrapped up but then Riewoldt and now O’Brien. It’s good because the specie died off a little and it’s back. It’s one of the great features of our game,” Smith said.

Known as “Disco”, Roach’s mark for Richmond at the MCG against Hawthorn in round five of 1979 is also considered one of the best ever, with photos of it among the most iconic Australian Rules images of all time.

“I was outside and my wife said ‘this kid took a really good mark, a ripper’ and then I came in and saw the replay,” Roach recalled of O’Brien’s mark.

“It was a very good mark. Fantastic. The pictures in the paper are just spectacular.

“It’s unusual because [Luke] Breust was on the ground and O’Brien is sort of coming down looking like he is going to land on top of him.”

He was in awe of the way Riewoldt and O’Brien took back-with-the-flight hangers, and the level of elevation Bolton got.

“They’re very good [Riewoldt and O’Brien]. Come in unexpectedly and have nobody blocking the path and to be able to hold onto it, fantastic.

“I’d hate to be the judge on the three best marks of the year so far.

“They’re all different sort of marks, I can’t choose between them.” 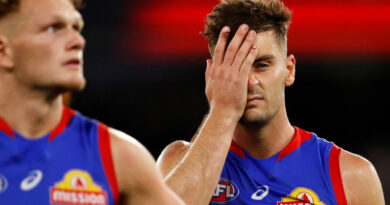 As straight as a Dog’s hind leg: Exploring the Bulldogs’ inaccuracy