Home » Rugby League » ‘Out there to shut her down’: Lions wary of the Tayla Harris threat

Tayla Harris shapes as the key for Melbourne in their dream of securing an inaugural AFLW premiership, but the star ruck-forward doesn’t feel burdened by her lack of premiership success.

One of the leading players in the more than five years of the AFLW competition, three-club player Harris is readying for a fourth grand final. A Brisbane Lions opponent believes that Harris, undoubtedly, “will be out there to prove a point”.

“We will be out there to shut her down. We know she is going to fly for everything so if we can lock her down and not give her that chance to get up on the footy we should be OK,” said Lion Shannon Campbell.

Harris, who joined the Demons in 2021, said previous grand final losses won’t be on her mind.

“Grand finals are hard enough to get in, let alone win them. So I think I’m fortunate to have been in them in the first place, and we’ll take the experience for sure,” Harris said this week.

“But I think anyone would agree that it’s the hardest thing in footy to win and only one team wins – and there’s plenty of others who are doing everything possible to get there as well. So yeah, I know I won’t be thinking about the previous ones, but I’ll certainly be taking the lessons.” 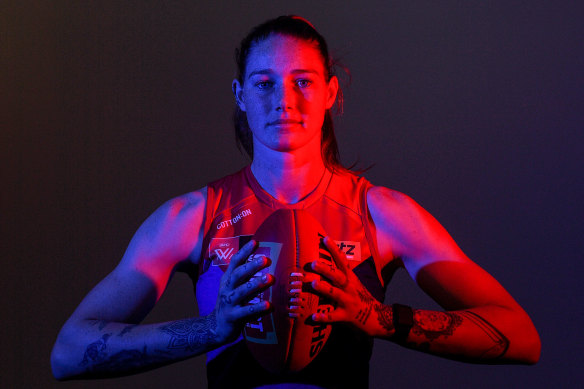 Tayla Harris ahead of the grand final.Credit:Getty Images

Since joining Melbourne last year, they haven’t lost a game to the Lions when 25-year-old Harris has taken to the field.

Harris started her AFLW career as a marquee signing for Brisbane in 2017 before joining Carlton the following season after requesting a trade to a Victorian team. In changing to Melbourne’s red and blue, however, Harris has found a new gear.

And when she goes up against her old sides, Harris usually helps achieve a win.

Earlier this year in round seven of season six, Harris with two goals helped Melbourne get a three-point jump over the Lions. Then, when they met again in the preliminary final, she played a role in getting the Demons’ to their first premiership decider after a four-point over the same foes.

The only game Melbourne lost this season was to Brisbane by 15 points – when Harris was out with suspension.

Harris’ impact goes well beyond her ability to kick goals, as Hawthorn coach Bec Goddard said the Demon can offset the balance of Brisbane’s defence by drawing defenders.

“It doesn’t matter if Tayla doesn’t kick a goal really because what she does is that she reshuffles Brisbane’s defence,” Goddard told The Age.

“The way the team’s balanced, all of a sudden they have to do something different to make sure she’s covered because she’s too risky not to put the defender on.” 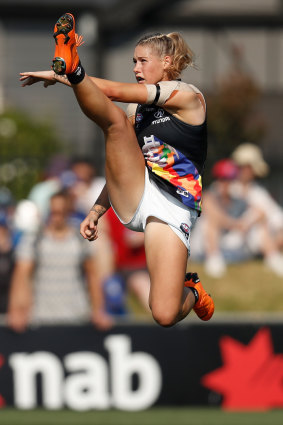 Additionally, in Brisbane focusing their defensive efforts on Harris and Kate Hore – who finished second in the competition for goals this season behind Brisbane’s Jesse Wardlaw – younger players such as Alyssa Bannan and Eden Zanker can move freer and hit the scoreboard.

This was evident in Melbourne’s preliminary victory when the Lions’ Phoebe Monahan took Harris out of the game, keeping her to just three disposals. However, this opened up for 20-year-old Bannan to become the star of the show with three goals, while ruck Lauren Pearce and winger Eliza McNamara also got a major each.

Harris, arguably the highest-profile forward in the competition who bolstered the Dees’ forward line with serious marking ability and aerial prowess, was transitioned to help in the ruck this season alongside Pearce.

In Melbourne’s qualifying final win against Adelaide in the first week of the finals, Harris finished with a game-high 19 hitouts, ahead of the Crows’ Cailtin Gould.

Given this, Goddard said her height and strength is an advantage, regardless of where she’s played on the ground, either in the forward structure or in the ruck against Lions’ Tahlia Hickie, who is third in the competition for hitouts.

“Just having that aerial asset is a massive, massive weapon really, it just changes the balance [of Brisbane’s structure].” 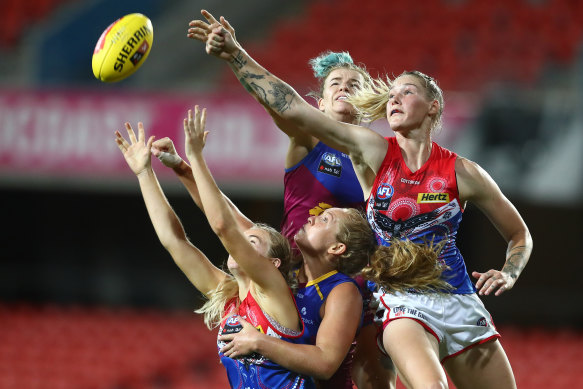 In confronting one of her former clubs in the season-decider, Harris has the full respect of her opponents.

“You’ve got to respect a player like that. She will throw her body around whether she is injured or not injured so we have got to be careful of her and their whole squad because they are a very good team,” Campbell said referring to Harris’ shoulder concerns earlier this week.

“This is her fourth grand final so she will be out there to prove a point.”

Campbell said the Lions’ defence will have a busy day ahead of them, as Harris isn’t the only threat on the field.

“You’ve got Kate Hore who is speedy and crafty. You throw in Daisy Pearce, she might be a veteran, but she is very smart when it comes to footy,” Campbell said.

“It is going be a good contest.”

Brisbane will host Melbourne at Brighton Homes Arena in Springfield – west of the Queensland capital – at 2.40pm on Sunday, November 27.