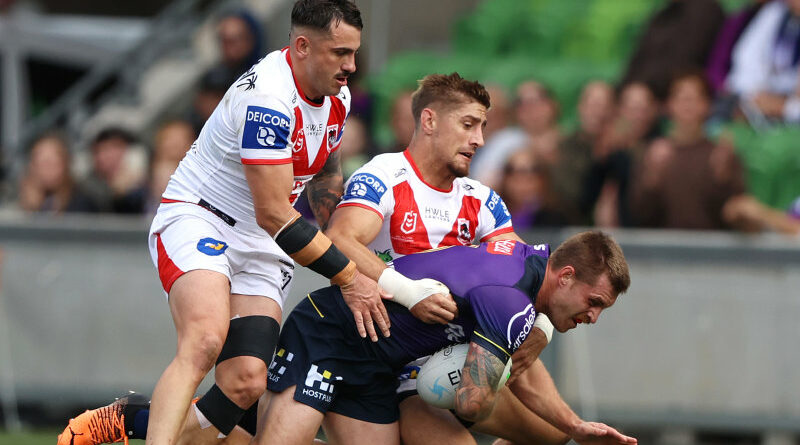 Melbourne Storm lost star full-back Ryan Papenhuyzen and centre Reimis Smith to injury but still moved to the top of the NRL ladder on Sunday.

The Storm beat St George Illawarra Dragons 42-6 at AAMI Park to improve to 8-1 [win-loss] with that effort following wins of 70-10 and 50-2 in the previous two games. 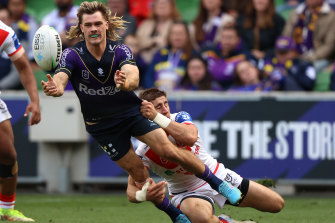 Ryan Papenhuyzen gets a pass away but was later injured.Credit:Getty Images

But the injuries to Papenhuyzen (low-grade hamstring strain) and Smith (suspected torn pec) come on the eve of the showdown with reigning premiers Penrith Panthers in Brisbane on Saturday night, a contest that was billed as a potential grand final preview.

Smith has become a mainstay at centre, playing 25 games last season and all nine games this term, while Papenhuyzen could be the best player in the competition so far with two tries before his injury on Sunday.

There is no clear replacement for either player, so Storm coach Craig Bellamy will have some work to do this week although winger Nick Meaney made a good fist of replacing Papenhuyzen as the goal kicker, making four out of five conversions and kicking a penalty goal.

Utility back Tyran Wishart filled in at full-back in the second half after earlier coming on for Smith at centre, while Chris Lewis took over centre duties after Wishart’s second move.

Kenny Bromwich led the team out in his 200th game, but it was his brother Jesse who looked to have the Storm off to a perfect start when he crashed over after a Dragons penalty and back-to-back six-again calls.

But the video review cancelled the score after Josh King had accidentally run into Tariq Sims on the play, negating his chance to attempt a tackle.

Soon after the Storm were shaken by the loss of Smith, who came out of a physical contest clutching at his shoulder. He was diagnosed with a suspected torn pec muscle which, if confirmed, will likely keep him out for several months.

The Storm persisted despite their frustrations in attack and on 20 minutes Papenhuyzen ran onto the right edge and received a pass before beating four tacklers and bursting over for a try and a 6-0 lead.

On 31 minutes the Storm doubled their lead as Cameron Munster picked up a dropped ball on the left sideline and fed Meaney, who palmed off one defender and then caught full-back Moses Mbye flat-footed, sprinting clear to score under the posts.

The Storm took a 12-0 lead into half-time and they were told to cut out their errors and put more pressure on the Dragons in the second half. They followed those instructions early, repeatedly pushing the Dragons into their defensive half.

Munster again broke the line on 48 minutes and put a kick wide to Meaney, who caught the ball and drew the defence before putting a kick out in front of Papenhuyzen, who collected the ball and finished the try but hurt his hamstring in the process.

The prospective New South Wales selection couldn’t celebrate the try as he was in too much discomfort, hobbling to the rooms for treatment.

The Storm didn’t lose their focus and zeroed in on the Dragons and came up with three quick tries as Jahrome Hughes scored, Munster scored and 150-gamer Nelson Asofa-Solomona powered over to take the margin past 30 points.

The towering New Zealand prop pointed to the sky following his try, no doubt it was an acknowledgement of his father who died earlier this year.

Forward Trent Loiero forced his way over for a late try as did Dragons forward Jack de Belin, to make sure the visitors didn’t go scoreless.

Kenny Bromwich was taken off in the last 10 minutes for a head injury assessment, although he walked off under his own steam so could still be fit for next week. 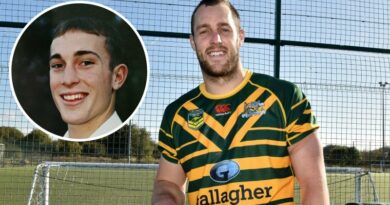 Isaah Yeo’s uncle died in the Bali bombings. 20 years on, he still carries the pain