Free-flowing NRL football is back.

Statistics compiled by Champion Data have revealed a significant drop in the number of penalties blown through the first round of the season. 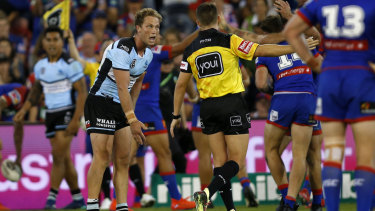 Tough call, sir: Cronulla’s Matt Moylan argues against a penalty in the Sharks’ defeat against Newcastle on Friday.Credit:AAP

There were only 93 total penalties awarded throughout the round, compared to 116 in round one last year – a drop of just over 20 per cent.

The decrease comes 12 months after the beginning of a controversial refereeing crackdown despite no direct edict from NRL football operations boss Graham Annesley to put a cap on penalty counts.

"As much as possible, I asked the referees to stay out of the game, allow the games to flow," Annesley said on Monday.

"There has been no instruction to referees about artificially keeping penalty counts low and if players decide to push the boundaries in terms of compliance with the rules, they will have to expect to suffer the consequences of that."

Further figures provided to the Herald by Champion Data show that per team, per match, there were 5.81 penalties blown – down from a spike of 7.97 last year and an average clip of 6.5 in the four years prior.

That did not, however, mean additional ball-in-play time following Annesley's move to cut down on so-called "dead time".

"(Ball in play) was up, significantly, after the first couple of games, before the wet weather really kicked in," Annesley said.

"I would expect to see that improve over the course of the season."

One would be naive to think teams won't try to take advantage of what appears to be added leniency but for now, Annesley believes the officials have struck the right balance in policing the laws of the game and allowing the game to flow.

"In the strict interpretation of the law you could penalise almost every ruck, every time you set the 10 metres, every scrum," Annesley said.

"There is this acceptable level of tolerance with the compliance with the rules and over 100 years, it's not a game where every technicality is stopped.

"I think last year that level of tolerance was taken too high and we needed to bring it back.

"I wanted the referees to use more discretion in determining what was required.

"We wanted to allow the players to take centre stage and in round one I think they did a pretty good job of that."

The total time taken by the NRL Bunker to make a try or no try decision was also down from one minute and two seconds to 57 seconds after the first round.

That figure would have been even lower if not for the penalty-try decision in the Knights-Sharks match which has provoked debate in the days since.

"The issue around penalty tries is that the referee, or the video referee, may award a penalty try if in his opinion, a try would have been scored if not for unfair play from the player on the defending team," Annesley said.

"That's subjective and there can be arguments about those things but the only person who really matters is the person who makes the decision.

"You need to be in that situation to make (the decision) to be honest.

"Whether he would have got to the ball or not is an objective decision and I'm certainly not going to be critical of the referee for applying judgment – which he has to – in these cases."

Annesley also backed the decision made by the officials in charge of the Roosters-Rabbitohs game to not sin bin Latrell Mitchell despite his high tackle on Sam Burgess appearing similar to the swinging arm of Michael Jennings which landed the Parramatta player a grade-two careless high tackle charge and 10 in the bin.

Stephenson set to be suspended for bet on Pies game

Carlton, Collingwood coaches in the dark over AFLW rule change