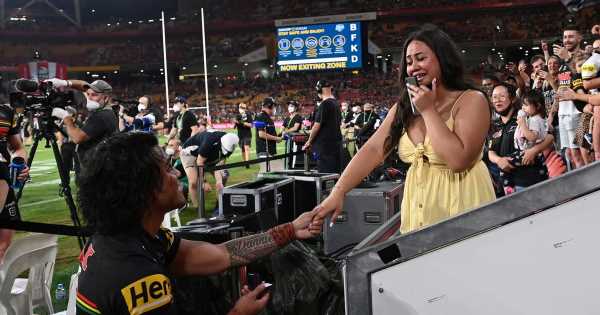 Penrith never trailed in Brisbane but were bruised and battered by the end, with To'o playing a prominent role as he raced for 238 metres with ball in hand.

Seconds after the hooter sounded at Suncorp Stadium, the Panthers winger picked himself up before getting down on his knee once more, this time in a proposal to partner Moesha Fuifui on the sideline.

To'o, 23, is widely known for his fun-loving approach to the game and celebrated his biggest career highlight to date with a personal landmark of even greater (or at least equal) importance:

Moesha was reduced to tears by the gesture, giving the bloodied Brian a peck before embracing her beau in front of the 39,000 fans in attendance.

"I thought he was coming over to give me a hug like he usually does, I wasn't expecting that, not at all," she said.

"I thank God, if it wasn't for him, none of this would've happened. Being here with each other made it even better."

Matt Burton and Stephen Crichton came up with the tries for Penrith while Nathan Cleary successfully kicked three goals from three attempts.

Cody Walker and Alex Johnston crossed over for the Rabbitohs in response, but one wayward attempt at goal from Adam Reynolds proved the difference.

To'o—who also helped New South Wales beat Queensland in this year's State of Origin series—spoke to Channel Nine after she said yes, detailing his girlfriend's contribution on the road to reaching league's pinnacle: "First of all, I want to give all the glory to God, what a year it's been for not only myself but for my community as well.

"I want to thank my beautiful partner for saying yes and also for the boys for getting us the win. I'm just grateful to be here and so lucky.

"I'm really speechless, not only because of the year I've had with Origin but also now to finish the year with a ring.

"It's a special moment to have with not only my partner but my family in lockdown as well. I'm really happy."

The Panthers finished as runners-up to the Melbourne Storm last year after suffering a 26-20 defeat in the Grand Final, but youngster To'o helped the team over the line this time around.

Half-back hero Cleary was named man of the match and told reporters: "I've been dreaming of this moment for all my life and finally it's here. We did it!"

"We had the hurt of last year and did it the hard way."

The result provided Penrith with their third NRL title after previously winning in 1991 and 2003, while Souths were denied a record-extending 22nd crown.

Bombers lost their soul with their move from Windy Hill

How do we keep the Sevens converts in NRLW?