Home » Rugby League » Phil Gifford: It happened 40 years ago, and nothing has been the same 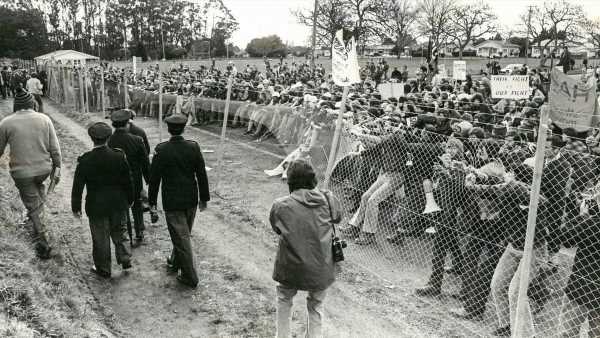 Forty years ago this week I was in Gisborne, reporting on the start of the 1981 Springbok tour. On that sunny Wednesday afternoon, as a group of no more that 500 protesters marched to the ground, I doubt I was the only one who could never have dreamed of what was to come.

The atmosphere was peaceful. One woman marched carrying a baby. Murray Ball, the Footrot Flats cartoonist, walked with his wife.

But at the back of Gisborne’s Rugby Park a small group of protesters ran up the bank behind the terraces, and,in what seemed a futile gesture, tore at what looked like a solid wire fence. To the vast surprise of everyone, a large section of the fence peeled away like plasticine.

Face to face with local rugby fans, the startled anti-tour people retreated down the small bank. The game went ahead as scheduled, but the reaction outside the ground was draconian.

Police dragged demonstrators away. Police batons flailed, as did fists and boots. On radio startled listeners heard Tim Shadbolt, then a young political firebrand, yelling, “They kicked me in the balls.”

Just three days later, in Hamilton, the balance on both sides shifted, skidding irretrievably towards violence.

Now there were 5000 protesters. As they gathered in the city centre before the match a Waikato church leader piously asked for peaceful protest, but then a fierce trade union official from the Kawerau pulp and paper mill, Willie Watson, stood at the microphone in a hard hat and steel capped boots, and roared, “F*** that, we’re going to stop this game.”

When several hundred protesters invaded the field, the poisonous atmosphere was extraordinary. In the stand I heard Ron Don, the chairman of the Auckland Rugby Union, shouting at the police squad on the field, “Get into the bastards. Charge them, belt them.”

For a generation, including a rugby fanatic like me, nothing would ever be quite the same again.

Yes, it staggers belief that the Olympics are lumbering on regardless in Tokyo despite Covid-19 still running amok in Japan.

But the Games are almost a walk in the park compared to the turmoil in South Africa, where rioting in the street, and looting and burning, are an evil added extra to the pandemic, which is itself regularly killing more than 600 people a day there.

In the middle of the carnage the British and Irish Lions are due to start a test series next weekend against the Springboks, whose captain, Siya Kolisi, and coach, Jacques Nienaber, tested positive for Covid at the start of the week.

So it almost feels normal to learn that Alun Wyn Jones, just three weeks after his shoulder was dislocated in Wales’ test with Japan, has now joined the Lions in Cape Town, and, if he gets through 20 minutes without fainting from the pain, may be playing the first test on 24 July.

It is true that Colin Meads once suffered a broken arm in South Africa, slapped some horse liniment on it, found a leather lace up sleeve, and played out the rest of the tour. If Wyn Jones does something similar good luck to him. But who could not wonder if, no matter what the specialists have told Wyn Jones, whether putting your recently injured body on the same field as a brutally powerful South African pack isn’t several rungs above what anyone who had a heart would consider standing up for Queen and country.

Somewhere in the cardigan swathed bowels of the Immigration Department in Canberra there has to be a mean-spirited, rugby-loving Aussie bureaucrat who has never forgiven Quade Cooper for having his worst test performance when the Wallabies lost to the All Blacks in the 2011 World Cup semifinal.

How else do explain the decision to refuse citizenship to someone who has lived in Australia since he was 13, has no criminal record, and has played 70 tests for the Wallabies?

Let me speak in his defence of what happened on that mild October night at Eden Park. Cooper was targeted by both the fans and the All Blacks in 2011. At the time he’d become such a villain to the Kiwi public his grandmother Millie in Kaikohe had to spring to his defence, telling the Herald Quade was “A good boy. He loves children and he loves the old people. He’s not a whakahihi (arrogant) boy.”

The sell out crowd booed him to the echo anyway, but that wasn’t the problem. No matter where the Aussies tried to hide him on defence (which was never his forte), the All Blacks found him with their kick and chase. By the end of the game he’d been harried, tackled, and rattled, into a state of impotence.

But come on Cardy Man or Woman in Canberra. He was trying his best. And that was a full decade ago. If he wants to be a dinky-di Aussie now, surely it’s time to forgive and forget.

Hogan returns to training a day after car crash