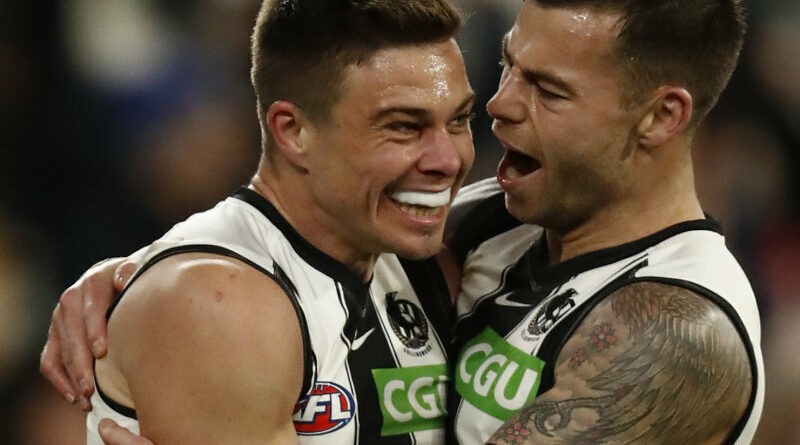 The king is dead. Long live the king.

If Richmond’s premiership hopes looked shaky after they were overrun late by West Coast, further diminished after they were strangled by St Kilda, and threadbare after being upset by Gold Coast, then they are as good as gone after coughing up a 29-point third-quarter lead against the lowly Collingwood at the MCG on Sunday, in doing so handing Magpies caretaker coach Robert Harvey his first victory since replacing Nathan Buckley. 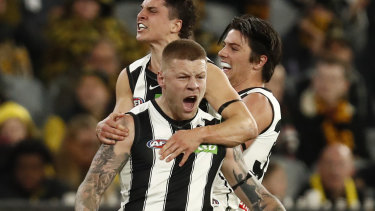 Having almost come from the clouds against St Kilda at the same venue seven days earlier, Harvey’s men gave themselves slightly less work to do this time around before flying home against all odds.

For the best part of three quarters, it looked like Richmond – while still well short of their best – would have enough to hold the Magpies at bay. The Tigers had been desperate enough around the ball and more polished in key moments, capitalising on Collingwood’s defensive turnovers and benefiting from the Pies’ relative wastefulness in front of goal. Sydney Stack made a solid return in defence, while Dan Rioli was also holding up well in his new role across half-back. 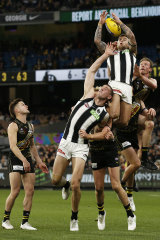 But the Tigers had been somewhat off their game, and there were moments in which the Pies had shown glimpses suggesting that if they clicked for any sustained period, they would threaten to topple the badly undermanned reigning premiers.

And so it proved. From inauspicious beginnings – a Josh Thomas goal just before time-on of the third quarter – the Pies took control of the game, dominating across all lines and running all over the Tigers by piling on six straight goals, and seven of the match’s last eight.

While Mason Cox was this time consigned to onlooker status, it was a procession that had earmarks of the first half of the 2018 preliminary final, the sole blip in Richmond’s four years of ascendancy.

Collingwood’s win was made all the more remarkable by the fact the Pies had lost young tall Will Kelly to injury before half-time. But ultimately it was Richmond who had reached critical mass, with their injury situation worsened when ruckman Mabior Chol hurt his leg in the early stages. Chol played out the game, but appeared laboured.

The Pies’ late charge came on the back of centre square mastery from Brodie Grundy, who had earlier in the game been the target of criticism from former Collingwood coach Mick Malthouse, speaking on ABC Radio. 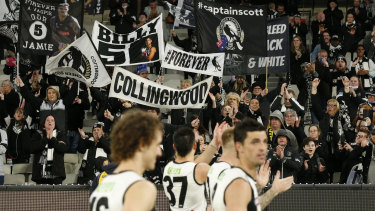 It’s been a tough season for the black and white faithful, but they were treated to a win over the reigning premiers at the MCG.Credit:Getty Images

Richmond are mathematically well and truly still in the final eight race. But it will be a pale version of the famous yellow and black that gets there if they do qualify. It has been a magnificent ride, but the end looks to have come. 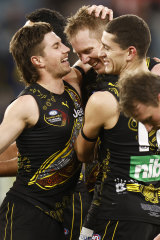 Jack Riewoldt was all smiles after a goal against Collingwood.Credit:Getty Images

Five days before he is due to play his 300th game, Jack Riewoldt notched another significant milestone after the half-time siren on Sunday. With the Magpies having cut the margin back to 11 points on the back of a strong 10 minutes, the veteran spearhead soared to take an impressive mark in heavy congestion as the seconds ticked down to the long break. Riewoldt went back and slotted his first major of the game, in doing so becoming the 24th player to kick 700 goals in VFL/AFL history. Only Kevin Bartlett, Jack Titus and Matthew Richardson had previously achieved the feat for Richmond.

Ash Barty’s affinity with the Tigers barely needs repeating. Her passion for the club is such that she was chosen to present the premiership cup when the Tigers clinched the flag in the tennis champion’s home state of Queensland last year. While the small matter of the pandemic and the ongoing footy season made it impossible for Damien Hardwick and Trent Cotchin to repay the gesture on Wimbledon’s centre court during the early hours of Sunday morning, the Tigers made sure to honour the new queen of grass at quarter-time, calling for an ovation which the faithful duly delivered.

The inspiration driving Luai to become Penrith’s long-term No.6 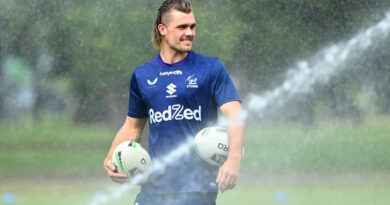 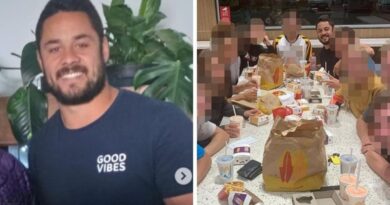