Carlton star Patrick Cripps has become the first player since Gary Ablett in 2014 to be awarded the Leigh Matthews Trophy as the AFLPA's MVP while playing in a team that failed to make finals.

The 24-year-old was brilliant in the first half of the season when the Blues won just one game, before lifting his performance to another level when David Teague took over from Brendon Bolton as coach after round 11, inspiring his team to victory in the caretaker coach's first game in the role with 38 disposals and four goals. 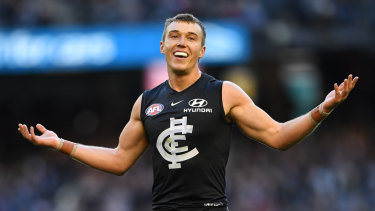 MVP: Patrick Cripps has won the admiration of his peers, beating out Geelong’s Tim Kelly.Credit:AAP

Cripps averaged 28 disposals and 8.5 clearances a game in 2019, with 17 of his possessions per match being contested. He won the universal respect of his peers and football supporters for his efforts on the ground and measured approach off the field, polling 832 votes.

Cripps pipped Geelong star Tim Kelly (519 votes) for the award, with Kelly being runner-up in just his second season of football after being plucked from the WAFL in the 2017 national draft.

Kelly managed to better his debut season after an attempt to be traded to West Coast failed when the Cats and the Eagles could not reach an agreement, while the Brisbane Lions' Lachie Neale (481 votes) finished third in his first season at the club after he crossed from Fremantle.

Collingwood ruckman Brodie Grundy was fourth and Fremantle skipper Nat Fyfe fifth. All five players were named in the All-Australian team, with Fyfe being made captain.

Cripps' award signals a bright future for Carlton, with his teammate Sam Walsh a runaway winner of the best first-year player title, while the Eagles' Shannon Hurn was named best captain and Richmond's Dylan Grimes won the Robert Rose award for most courageous player ahead of the Lions' Mitch Robinson.

"Patrick has had a super season and his ability in contested situations is as good as any player I've seen," Dangerfield said.

"As a midfielder, he can do it all on the inside and outside and, with his huge frame, he's like a key forward in the air.

"His ability to back it up week after week despite an up-and-down season for the Blues is a huge reason he's been able to secure the MVP."