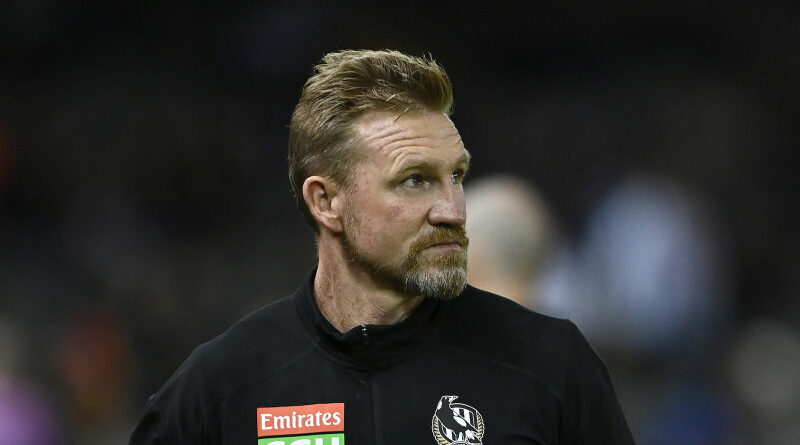 Nathan Buckley’s future probably isn’t the most important question for Mark Korda’s board and Jeff Browne’s planned board challenge.

In theory, it should be each camp’s vision for Collingwood that ought to be the battleground. Coaches, after all, are just one component in a complex club machinery. 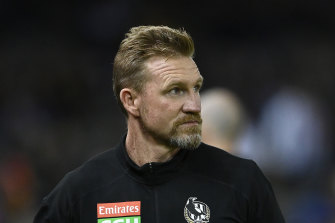 But the uncertainty about whether Buckley coaches on – and the length of term if he does – shapes as the one that Collingwood’s increasingly sullen membership will want addressed, and which will receive the most traction in a football media with an insatiable craving for the Collingwood circus.

Buckley is accustomed to being in the eye of the Collingwood storm. For more than a decade, most major football decisions – the handover from Mick Malthouse, the jettisoning of 2010 premiership players, the review of 2017 and reinvention of him as a delegating coach in 2018 – have revolved around the ex-champion.

The one major exception was the fire sale of 2020’s post-season. That debacle was not about Buckley, nor his handiwork, but it has certainly impacted on him.

The timing of his contract expiring this year is unfortunate, and it poses difficulties for both the incumbent board and Browne and co, who will need a Buckley position for the members.

Korda was on the radio hustings (3AW, SEN) on Wednesday, in what was perhaps the first sign that the current board has moved into campaign mode, in anticipation of an extraordinary general meeting called either by or on behalf of the Browne camp.

The incumbent regime’s stated position, as reiterated by Korda, is that there will be no call made on Buckley until the latter stages of the home-and-away season.

Korda said he did not want an EGM and, in another clear piece of campaigning, reminded everyone that Eddie McGuire, Browne’s close friend and ally, had argued against an EGM, too.

But an EGM appears to be the only mechanism by which Browne can wrest control of the board before there is a decision on Buckley.

If he leaves an election until the annual general meeting early next year (when three board members face election) – the more conservative path – Buckley’s position, stay or remain, will have been settled without Browne’s input.

Another possibility is that, by holding the EGM gun to the head of the Korda board, Browne can negotiate a handover from Korda relatively soon. From what one can gather about Korda and his board’s intentions, this will be a tough ask.

Browne and co also have the option of challenging three sitting members – ex-Australia Post boss Christine Holgate, the influential Peter Murphy and new director-in-waiting Bridie O’Donnell – at the next AGM. This would not be a majority on the seven-member board, but he would have the members’ mandate.

O’Donnell would be the easiest target, by dint of her lack of history of supporting Collingwood – as fans highlighted on Tuesday. If the appointment of O’Donnell makes sense in terms of women’s sport, government relations and the club’s inclusion agenda after the racism report, the club’s fan base places passion for Collingwood ahead of all other qualifications.

Essendon, by contrast, brought in the great Kevin Sheedy – raw meat to the base – to ward off any insurrections late last season when the Dons were under fire as players walked. Blatantly political, this provided stability.

If there is a Collingwood election soon, the battleground will be the failing (men’s) football team and not the club’s finances, facilities or the Do Better report. Korda must recognise this reality.

List manager Ned Guy is already a casualty of the fire sale. Graham Wright has been handed the footy department keys and will not be challenged by the Browne camp, given his credentials and relationships (including with fellow 1990 flag mate Craig Kelly, who has backed Browne).

This leaves Buckley and his coaching panel as the focus. Buckley’s assistants, headed by Robert Harvey and Brenton Sanderson, will struggle to hang on in this environment, particularly when the evidence of 2018-19 is that the team peaked when fresh voices – especially Justin Longmuir – were supporting a less hands-on coach.

The Korda board see themselves as under no obligation to go into caretaker mode, delaying a Buckley call until the board composition is settled.

It is hard to imagine that Buckley will be renewed with a one-year deal, which does not settle the coaching uncertainty. If he is renewed, it must be for two years, with the club protected with a smaller payout clause.

The Buckley problem, for all parties, is that Collingwood are long odds to contend for the flag again until 2024, at best. So he would need at least three years to be part of that tilt and, if he can’t be, what’s the point of keeping him? Conversely, how can the Pies justify recontracting a coach until 2024 – a 13th season – without a flag?

Browne has three options on Buckley to present to members: 1. That they will re-contract him; 2. respectfully let him go, and 3. review him and make a decision later this season. The latter, obviously, is the safe choice.

Or there’s a variation on option three, with a sting. Browne can say “we’re reviewing the coach position and considering all alternatives, Nathan included”. This would probably point to Buckley’s removal.

Collingwood fans do not have a universal position on Buckley. That said, those who want a change of coach seem more passionate and riled up than those who quietly support retention.

Finally, while Buckley has said he wishes to continue as coach, there’s always the possibility that he will walk, removing himself as a political football.