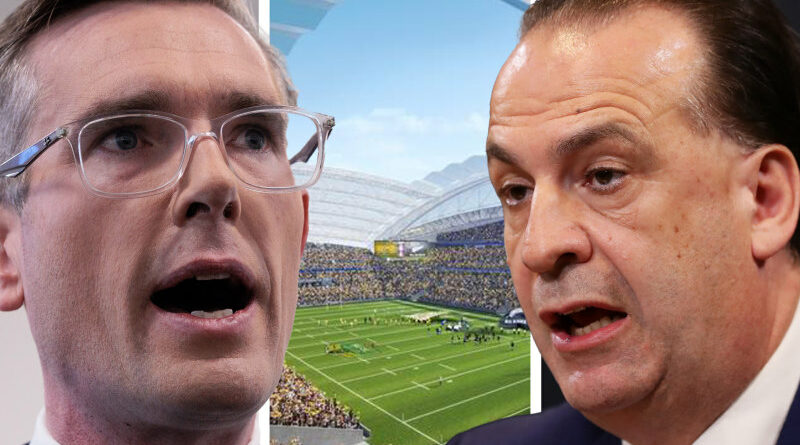 After a solid 10 years of craven cave-ins by the NSW Government to the NRL – handing over billions of taxpayers dollars to give the non-tax-paying sport state-of-the-art infrastructure – finally we have a Premier who has called a halt. Instead of putting still more hundreds of more millions to ever more “boutique stadiums” at suburban grounds, on Tuesday the news broke that they will instead put the money to things like the recovery of flood-ravaged Lismore, and a hospital system overwhelmed by COVID-19. (I know. Revolutionary, right? Public money, to public need. Amazing.)

This has resulted in endless squeals from the NRL, and threats to take the grand final elsewhere unless the government caves in to them again.

I suppose there’s also a downside, I just can’t see it yet. But we’ll get to that.

Just say that from the Premier’s office high in Governor Phillip Tower in Farrer Place, you could press a button to make the areas in greatest need of public funds across NSW glow red in the night. And we’ll make it so that the more intense the need, the more wattage there is to the red glow. Got it? 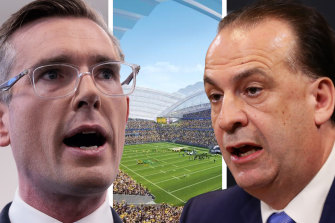 Now, who – seriously, and you’re on your honour – thinks half-a-dozen blobs would show up around the state from rugby league clubs needing new stadia and that those blobs really would glow more brightly than Lismore, and hospitals?

This is your serious position, Peter V’landys?

Courtesy of the taxpayer, the NRL has already got a brand-spanking new state-of-the-art stadium to replace the SFS, which looks remarkably like the old one, with a few bells and whistles attached. That money was given to them despite the government’s own figures never making any serious claim more money would come back than went out. The NRL, which recently signed a $2.3 billion dollar deal with the television sugar-daddies, including Channel Nine, publisher of this masthead, for the broadcast rights, contributed nothing to the cost.

Did we taxpayers get a thank you card, a warm nod, a pat on the back?

Not a bit of it. We got nothing bar more demands for more money for boutique stadia!

Initially the government agreed, but now appears to have had an attack of sanity, conscience or maybe even an ultimatum from Treasurer Matt Kean: we can’t do both.

And the NRL in response, has put out the famous Warren Zevon call: Send lawyers, guns and money, the shit has hit the fan.

Their major threat is – are you feeling lucky, punk? – if the government doesn’t back down they’ll take the NRL grand final elsewhere.

No, really they will!

Hold their breath and hope to die, they will!

The grand final is watched by three million people or so. About 80,000 of them are at the match. Does it make that much difference where it is broadcast from? Say it does go to Brissie, and the Storm play the Raiders. Would 52,000 people actually go north of the Tweed to watch it? How would the empty seats look at an NRL grand final? 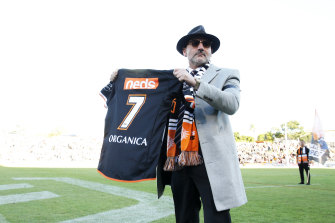 The obvious truth is the NRL needs Sydney a hell of a lot more than Sydney needs the NRL. And in a real fight between the NRL and a state government with backbone, who thinks the NRL can do more damage?

The reaction from Wests Tigers chairman Lee Hagipantelis to Premier Perrottet’s new backbone has been instructive.

“I assume if the state government is to backflip on its commitment to fund suburban stadiums,” he told the Herald, “then the $300 million committed to the Penrith stadium can now be better utilised for schools and hospitals? It would be outrageous for Penrith to retain its stadium for the obvious political benefit of its local member. These are public funds and should be managed for benefit of the public.”

I repeat: Ummm, yes? Again, precisely as your humble correspondent has also been saying, ad nauseum. A pity, Mr Hagipantelis, that you only seem to get the outrage of it because your own club has missed out. But the rest of us have been filthy for yonks.

I finished my last rant on the subject of Penrith – supported by a rich pokie palace – getting that kind of largesse by saying this.

“Premier Perrottet, seriously. I get that you inherited a government that made no apology for pork-barrelling – while you were previously known as a brake on that appalling practice. But look at this! [Penrith] really is one of the richest clubs in Australia. And somehow your government continues to hand over hundreds of millions of our dollars to them, while telling us it is for the good of the state.”

At least the Premier has put a cap on handing over hundreds of millions more to the NRL. Is it too late to stop the Penrith outrage too?

This column will no doubt draw the usual fire, from the usual suspects. Big woop. Let the critics look the people of Lismore in the eye, and tell them that the red glow coming from Penrith, the glow of public need, is more intense than the one coming from Lismore’s homeless and our hospital system.

Shirley and I think you cannot be serious. 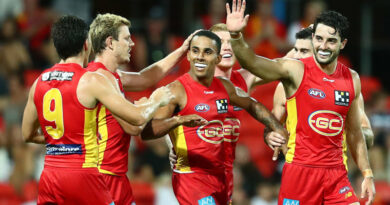 Suns burn Cats to build confidence for round one