Adam Reynolds has been cleared of a serious leg injury, according to NSW coach Brad Fittler, after the halfback was forced from the field in the 35th minute of the Rabbitohs’ win over the Tigers on Saturday night.

South Sydney Wayne Bennett told reporters post-match that the initial diagnosis of the injury was a fractured leg, but speaking on Nine's Sunday Footy Show, Fittler delivered news which will bring a smile to the face of Souths fans. 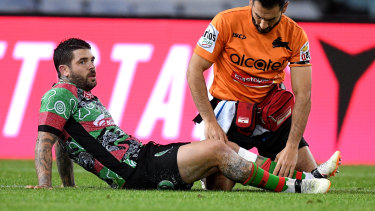 Relief: Adam Reynolds has been cleared of serious injury.Credit:AAP

"Adam has been cleared of a fracture so worst case scenario …  he will be out of training for a couple of days," Fittler said.

While Reynolds has avoided serious injury, he could still be sidelined when NSW take on Queensland in the State of Origin opener at Suncorp Stadium on June 5.

Fittler is understood to be leaning towards retaining Nathan Cleary as his halfback, despite Penrith's disastrous start to the season.

He is expected to be partnered by Cody Walker after Luke Keary was ruled out of the June 5 blockbuster due to a concussion suffered against the Knights in Newcastle on Friday night.

Keary was considered a certainty to break into Fittler's side prior to the second significant head knock he has suffered this season.

Fittler, who led NSW to a 2-1 victory in last year's Origin series, will announce his team for the opening game later on Sunday.

O’Meara aiming to play every game in 2019

SIR CLIVE WOODWARD: Jones hasn't learned from scrum-half woe
We and our partners use cookies on this site to improve our service, perform analytics, personalize advertising, measure advertising performance, and remember website preferences.Ok