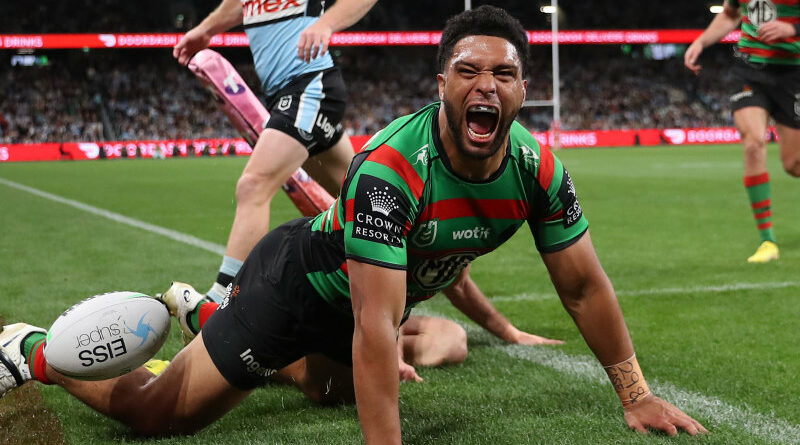 Allianz Stadium: Phil Gould said the best thing about South Sydney going up against the premiers – again – next Saturday is they will not be intimidated.

And Latrell Mitchell certainly backed up those claims when he declared after Souths’ 38-12 win over Cronulla on Saturday night: “We’re on the right side of the draw”.

Only Mitchell would know if he was joking or handing Penrith a decent smackdown.

Who cares because either way it will be a brilliant tussle.

Mitchell does not mind a few fighting words. He says it is good for the game.

The only thing better is the sight of him kicking conversions from the sideline, then raising his arms out and nodding his head in approval of himself.

He did just that with just over 10 minutes remaining as Souths semi-final victory was guaranteed.

The Bunnies are on their way to a fifth straight preliminary final. The grand final rematch has arrived a week earlier than expected. 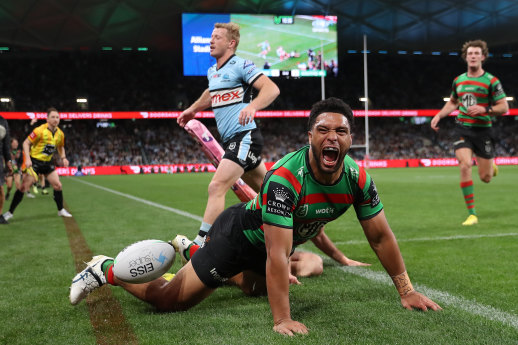 There are injury concerns for the Rabbitohs with Alex Johnston suffering a corked thigh and failing to return for the final half-hour. Siliva Havili did not even make it to half-time because of a leg injury, while Jai Arrow clutched at the same groin that troubled him a fortnight ago and came from the field late.

Junior Tatola was also placed on report for a suspected chicken-wing tackle on Ronaldo Mulitalo, and Lachlan Ilias collected Matt Moylan with a shoulder charge.

But Souths still have a fit Mitchell, Cameron Murray, Ilias and Cody Walker.

Plenty of Souths fans who attended Allianz Stadium six days earlier to witness an epic against the Sydney Roosters would have been wondering how much energy their players had left. Could Souths have been suffering from a Bondi hangover?

But they muscled up in defence early, and scored after three minutes through Mark Nicholls. 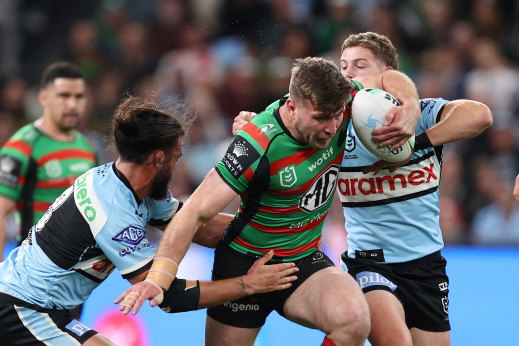 Apart from a lull in the second half when Cronulla looked an outside chance of getting themselves right back in the game, Souths remained in control.

They have momentum and enough star power to knock over the Panthers.

Coach Jason Demetriou, who is suddenly 80 minutes away from a grand final in his first year as an NRL head coach, deserves plenty of praise.

So, too, Cronulla’s fellow rookie head coach Craig Fitzgibbon, whose Sharks finished second on the ladder during the regular season.

The Sharks had to survive their own 92-minute golden-point epic last weekend against the Cowboys, and lost Royce Hunt and Siosifa Talakai during the week.

They can hold their heads high for exceeding so many expectations. Mulitalo kept trying to the end and was a threat on the right wing.

There were 39,733 fans inside Allianz Stadium, and it was bloody great to see such a large number of fans who made their way from the Shire. It was wonderful they got to farewell departing forwards Aiden Tolman and Andrew Fifita.

The Sharks will be better for the hit-out even though they would have been aware they also blew a golden chance to progress further this series after hosting in week one.

Deep down the Sharks would have conceded the challenge became that tad too hard right on the break when Murray brushed past some soft defence from Dale Finucane and Teig Wilton to score.

Finucane dropped to his haunches and knew what a costly miss it was on his NSW Origin teammate.

There were a couple of decent shots in defence with Campbell Graham ironing out Will Kennedy, Ilias forcing Wade Graham to knock on, while Kennedy showed tremendous strength to stop Damien Cook from scoring a certain try.

Next week will be a belter. Hopefully Souths are at full strength and it is a gripping contest. Take the skinny odds Mitchell nails a few from out wide and raises his arms and nods his head in approval. 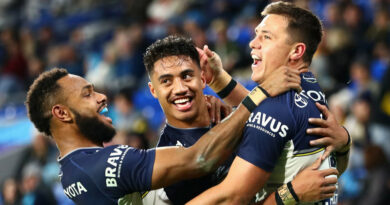 No Maroons stars, no worries as Cowboys crush sorry Titans