SOUTH Sydney are reportedly expected to withdraw their contract extension offer for coach Anthony Seibold amid speculation of a coach swap with Brisbane mentor Wayne Bennett.

The Rabbitohs’ decision was prompted by the in-demand Seibold informing the NRL club he wanted to pursue his application to succeed Bennett at the Broncos in 2020, The Australian reports.

A decision on Bennett’s successor is likely to be made at next Tuesday’s Broncos board meeting, with Seibold in the race with Michael Maguire, Jason Demetriou and Kevin Walters.

Seibold ‘the first domino’ in merry-go-round0:00

NRL: Robert Craddock says Anthony Seibold has been targeted by the Broncos as a replacement for Wayne Bennett, which is set to start the coaching merry-go-round.

Seibold is off contract at the Rabbitohs at the end of 2019, and is yet to sign an extension that has long been in the works for the rookie coach. It is unclear whether it will remain tenable for the 44-year-old to stay at the club for next season, or whether a swap to bring Bennett to Redfern could also be a possibility.

It comes after English Super League club Leeds confirmed on Wednesday night ex- Rabbitohs assistant David Furner did not have a get-out clause in his contract to leave if an NRL job became available.

Regardless, the news could have implications at a number of clubs, with the Wests Tigers still hopeful of landing one of either Michael Maguire or Bennett. That would allow the joint venture to release Ivan Cleary to Penrith, who are confident of getting their man despite two years still remaining on his contract with the Tigers.

MAGIC ROUND: SUNCORP SET TO HOST MEGA WEEKEND IN 2019

DREAM DRAWS: THE TEAMS WITH THE BEST CHANCE TO GET OFF TO A FLYER

SOUTHS SHAKE UP: FIRST DOMINO TO FALL WITH FOUR COACHES TO BE NAMED IN FIVE DAYS

BETTER THAN BENNETT: HASLER’S RECENT RECORD STANDS UP AGAINST THE BEST

Manly also announced their new coach in Des Hasler earlier this year independent of the rest of the moves, but with concerns still surrounding their exit negotiations with former mentor Trent Barrett.

But NRL chief executive Todd Greenberg said the coaching merry-go-round was a positive for the game and its fans.

“There is always conjecture about the leadership roles in our clubs,” Greenberg said at the NRL’s draw announcement.

“Clearly there is a sweet spot here where there are a number of clubs looking at filling vacancies or voids of end-of-term contracts for coaches and I expect that will play out over the next month.

“I think the fans are probably enjoying sitting back and watching more rugby league content as we sit into the end of October and into November. “I’ve been in rugby league a while now, this is all part of the rich tapestry.” 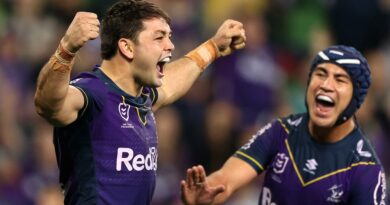