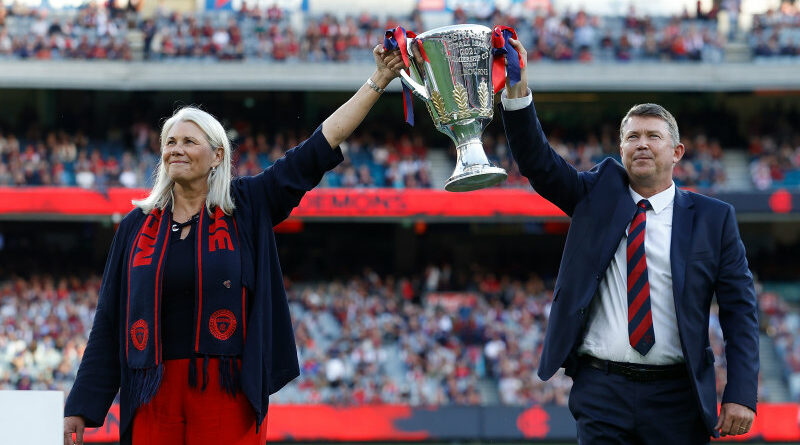 Back in February while the Melbourne Football Club sat suspended in one of football’s happiest places – caught between the joy of a drought-breaking premiership and the tantalising business of a relaunch towards another – coach Simon Goodwin became the public subject of some embarrassing – albeit unproven – allegations.

There was drinking and gambling and bullying claims dating back to the Demons’ annus horribilis of 2020. None of the above has actually been substantiated – certainly not the drinking and the gambling, while the bullying has been disputed – but headlining the fall-out among the internal staff battles at Melbourne at the time emerged a classic picture of an under-performing club.
One would imagine that if text messages and minutes of meetings and transcripts of crisis talks with head office were revealed from Geelong in 2006 or Richmond in 2016 the detail would be different, but just as titillating. And just as embarrassing. 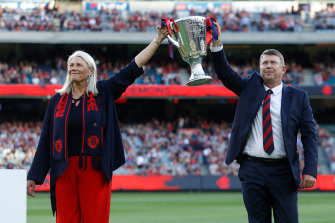 But it certainly was extraordinary that someone chose to record or extensively transcribe a meeting the Demons called in early February 2021, involving two Melbourne directors, the AFL’s CEO Gillon McLachlan and chairman Richard Goyder.

Goodwin’s future at the club – he was under pressure but contracted back then until the end of 2022 – was the key topic of the high-level talks, although the published comments have largely focused upon McLachlan’s comments.

Strangely, when the allegations were aired in the Herald Sun in February they failed to make an impact. Several days after publication Max Gawn spoke at a private function of his anger that his beloved coach had been targeted. Gawn said that Goodwin had appeared shattered at training the day the reports were aired but had bounced back the following day after his players and the Demons’ off-field leaders had rallied in strong support.

By May, Goodwin had a new two-year contract extension and Melbourne were undefeated after 10 games. By the end of last month, the Demons were looking unbackable back-to-back flag favourites.
But there was still more dirty linen to be aired from the troubled times of 2020 and early 2021.

This week the first target was Melbourne’s premiership president Kate Roffey when a series of text messages between Roffey and her predecessor Glen Bartlett were published. The most pertinent dated around the time of the now-pivotal 51-point loss to Port Adelaide in round nine 2020.

While some of Roffey’s comments about staff will have embarrassed her, there for the grace of god go club directors, coaches, and staffers across the competition if their private conversations were released.

Roffey was doubly embarrassed this week after a group of Melbourne players hit Greville Street, Prahran on Sunday night for a damaging dinner, which led to Jake Melksham punching Steven May. Disturbing, too, was the fact that May was drinking against the rules, that no one managed to stop him, and that he was hit because he was allegedly goading and belittling teammates.

This incident does not resemble the wonderful team culture that Roffey has repeatedly extolled since the premiership. Melbourne need May in their backline, but he won’t be available for Monday’s pivotal Queen’s Birthday clash. May might have matured immensely, as his coach stressed on Friday, but this is a major setback.

Melbourne need a settling win on Monday as they brace themselves for more revelations from the year that preceded their first flag in 57 years. By Thursday, it was CEO Gary Pert’s turn to be embarrassed as his management style was brutally assessed by McLachlan as more transcripts were published.

The suggestion was that Pert was running interference in trying to save Goodwin as at least one key club director wanted Goodwin’s behaviour scrutinised with a view to potentially terminating his contract. McLachlan was quoted as saying of the embattled coach: “There are two things here, one about his health and wellbeing and then a broader, reputational issue, including his ability to do the job …”

Certainly more titillating stuff, although Pert and McLachlan have already made their peace over the latter’s comments, which included this advice to the Melbourne directors regarding how to handle Pert: “Gary shut the f— up and listen, or you will go.”

These types of conversations are not unusual at the highest level of the AFL, just as they would typify most robust corporate workplaces. Again the staggering fact is that they have been publicly revealed. Most worryingly for Melbourne is the broad depth of information retained in telephone records, emails and other documents that could come to light, including details of staff and player mental health, illicit drug use or other previously sacrosanct information.

But equally significant for the club and Melbourne’s off-field bosses is just how strongly Pert emerges as a hero of the 2021 premiership. The strong belief the Demons boss had in the senior coach after his football review, the lengths he was prepared to go to, to defend him, not to mention the clear success of the changes he put in place, have again been underlined.

And Roffey? Her biggest misstep appears in those text messages to be typical of those of a passionate club director speaking after a thrashing and a phone style with a predilection for unfortunate emojis. Having enjoyed a triumphant first year in the job, she remains the drought-breaking premiership president whose working relationship with her CEO appears as strong as any in the competition. Pert’s private support of Roffey this week was reminiscent of Gawn’s support of Goodwin in February.

The big test for the club is how it responds to the reminders of its troubled recent past. Goodwin might have been defensive but did not gild the lily on Friday when he addressed the May-Melksham fight. But he laughed off a question about the meeting with head office and denied he had any behavioural problems.