Ricky Stuart's love of the English is set to extend to the Rugby World Cup, where the Canberra coach will spend time with the Old Enemy's Eddie Jones.

Stuart will look to try and take the Raiders – and his four resident Englishmen Josh Hodgson, Elliott Whitehead, Ryan Sutton and John Bateman – all the way through to the NRL grand final before he flies to Japan a week later to link with his good friend. 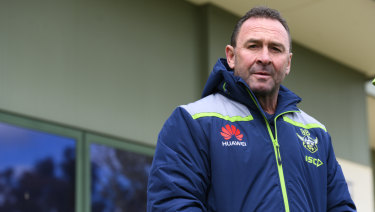 England will play their last pool game against France on October 12 before Stuart joins Jones for the lead-up to the quarter-finals.

"It depends how much they pay me,'' Stuart said with a laugh.

"It will be great with Eddie. Nigel Ashley-Jones, who is our head of performance here in Canberra, worked with Eddie in England.

Having this chance with Eddie  to see how he works with his squad will be a real privilege.

"I got Nige to ask Eddie if there was an opportunity to see how he goes about his business and he jumped at it. Eddie was all for it.

"Myself, Nige and [football manager] Matt Ford will spend the week leading into the quarter-finals with him. I have a lot of admiration for [All Blacks coach] Steve Hansen, Eddie and 'Cheik' and how they go about their business. 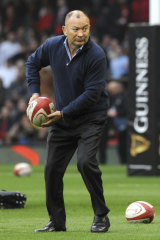 England rugby coach Eddie Jones before his side played Wales in February.Credit:AP

"I spent four days with the All Blacks leading into a Bledisloe at Suncorp a couple of years ago.

"And now having this chance with Eddie  to see how he works with his squad will be a real privilege.''

Stuart signed a three-year extension with the Raiders this week that will take him through until the end of 2023 – a ten-year reign that will see him pass Tim Sheens as the longest-serving coach of the Green Machine.

His ability to evolve and continue to teach himself new things from different codes was just one of the reasons the Raiders extended his contract, said Canberra boss Don Furner.

"Coaches all have to look for improvement from season to season, and Ricky never stops looking.  Thankfully, he's got this opportunity with Eddie Jones,'' Furner said.

Jones actually accommodated Stuart's good friend but rival on Saturday, Craig Bellamy, last November. The Melbourne coach told the Herald at the time: "He was all business and switched on when he needed to be, but then there were times where he would show his sense of humour as well – and you could tell the players like that about him.

"He’s actually very funny.  He has a really good sense of humour, and I found he always had time for a little bit of fun."

Jones also spent time with Bellamy's understudy Jason Ryles a few years ago, as did Shane Flanagan after Cronulla won their historic title.

Stuart is no stranger to broadening his horizons elsewhere, including a couple of trips to get a behind-the-scenes feel at the San Diego Chargers, San Francisco 49ers and Seattle Seahawks.

He knows the enormity of trying to defeat the Storm in their own backyard on Saturday and advance to the preliminary final. They overcame an 18-0 deficit last month to do just that against the minor premiers.

Stuart has enjoyed success with so many Englishmen in the nation's capital. Playmaker George Williams will become the fifth Pom at the club in 2020. Two-year extensions for Sutton and Whitehead are expected to be signed soon, which will take both of them through until the end of 2022.

Panthers’ legend pinpoints the problem with giving Cleary the keys 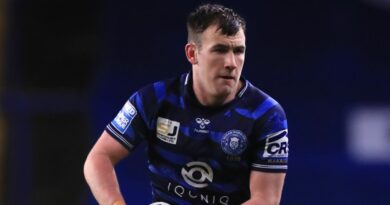 Saints topple Demons to close in on eight