That’s not a premiership ring – that’s a miracle!

Legendary commentator Ray Warren might may have hung up the binoculars earlier this year, but he will still have a presence on grand final day having designed the ring that will be presented to the players from the winning team.

“I told them I’m a sports commentator – I have no experience in designing rings,” Warren said. “But, anyway, now I have.”

Sydney jeweller Affinity Diamonds has been creating the premiership rings, which are worth $10,000 each, for the past eight years.

In that time, the likes of former Cowboys captain Johnathan Thurston, former police commissioner Mick Fuller and an ICU nurse during the first year of the pandemic have designed the precious jewellery.

Warren, who retired on the eve of State of Origin earlier this year, was surprised when he took a call from Affinity Diamonds founder and chief executive Sam Rahme, who is a long-time friend of Manly coach Des Hasler and also the club’s over-qualified gear steward. 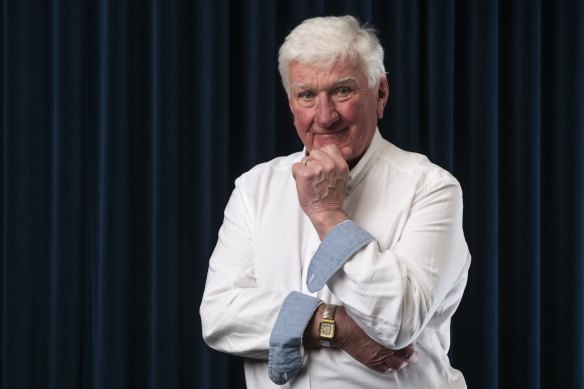 “Ray’s a natural in jewellery design – he’s got a future,” Rahme said of Warren’s eye for crafting breathtaking bling.

“Each year, I pick someone who’s done something worthy in the game. Ray’s done so much, so in his retirement year we thought he’d be perfect. We asked him to come up with something big and blingy that can be worn on special occasions. He did well. It’s a nice-looking ring.”

Warren insisted an inscription of the Sun-Herald photographer John O’Gready’s iconic image of Norm Provan and Arthur Summons went on the side.

The ring itself is made of solid white gold and encrusted with two carats of diamonds and “pigeon-blood red” rubies. 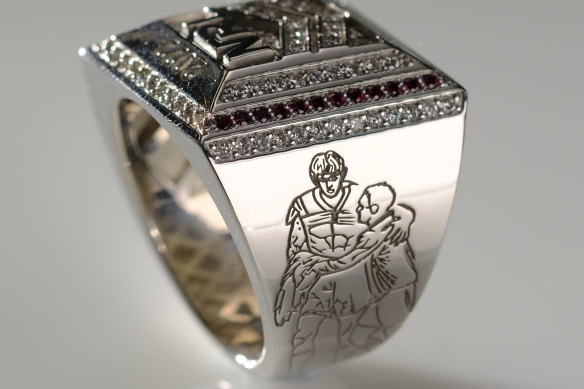 Detail of the famous Norman Provan and Arthur Summons embrace on the side of the ring.

“I don’t know what pigeon blood looks like,” Warren said.

The rubies are significant. They signify the Red V of St George.

“When I was thinking of a design I thought of Norm and Arthur and the mateship that defines rugby league,” Warren said. “Then I thought of Norm and all the great St George players from those 11 grand finals in a row [from 1956 to 1966] and those we’ve lost in recent times: Reg Gasnier, Graeme Langlands, Johnny Raper and Norm. That’s why I wanted some red in there.”

Warren called 45 grand finals and 99 Origins and agonised about retirement before making the tough decision, at the age of 79, to call it a day. 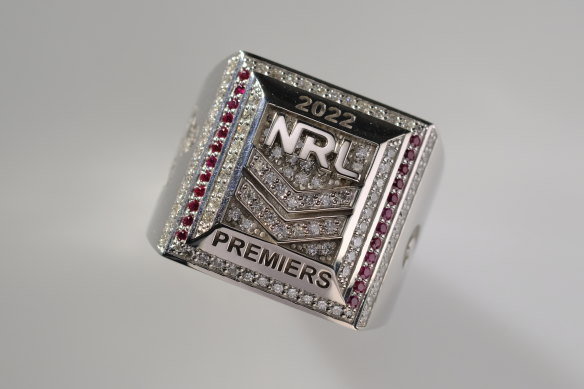 The one ring to rule them all.

He politely declined an invitation from NRL chief executive Andrew Abdo to attend the decider between Penrith and Parramatta at Accor Stadium on Sunday night.

On Friday September 30 at 7.30pm, Nine’s Wide World of Sports presents Ray Warren: Calling Time – a celebration of the voice of Australian Sport.

Watch the NRL Grand Final Exclusive Live and Free on Channel 9 and 9Now.

Collingwood to seek new naming rights sponsor for home base

Blues turn attention to mids as Papley stays a Swan