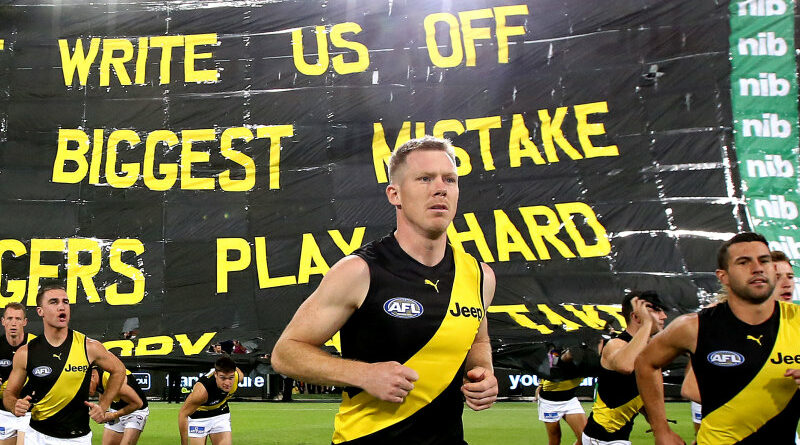 If Richmond would greatly prefer to be meeting Adelaide at the MCG, before their own adoring mob, leaving Victoria on the last plane to Sydney presents the Tigers with a timely opportunity.

They’ve regained Trent Cotchin, Dion Prestia and Shai Bolton, and will be fielding their strongest side since their round seven comeback victory over the Bulldogs, even without Tom Lynch. 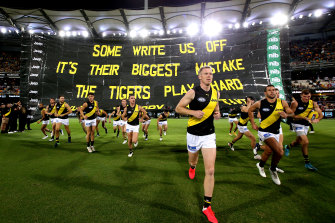 But going on the road also offers them a chance to reset, as they did last year in the Queensland hub after a period of indifferent form and a struggle to deal with the lockdown, when Damien Hardwick, by his admission, was not at his best.

“It’s a good little breather for us to get away and reconnect pretty strongly,” Hardwick said on Saturday, as the Tigers prepared for a reversion back to 2020 and a short period of non-home games in other states.

“We are in a similar situation to last year.”

While Hardwick noted that the Tigers did not know where they would be playing in round 12, the club is prepared for the AFL’s likely scenario that the Dreamtime game against the Bombers will be played in Perth, and have sent most of their playing list on the road with that scenario in mind.

Last year, the hub saved Richmond from a season that had been teetering, as they gradually found form and cohesion, overcoming the multiple distractions that beset them in Queensland to win their third flag from third position, proving again that while they aren’t a dominant side in the manner of Geelong 2007-2011, their low-possession, high pressure brand is built for finals.

But the degree of difficulty this year is greater than in the shortened hub-based 2020, largely because of greatly reduced prospects of making the top four and earning a double chance – a repechage that was necessary last year (they lost to the Lions in week one of the finals).

The Tigers are 5-5, with a percentage of 99. To make the top four, they will need to be at least 15-7, and their percentage means they may need to be 16-6. That’s improbable, although their fixture in the last 12 weeks is far friendlier than the first ten games, given that they’ve already played Melbourne, Geelong, the Bulldogs, Port Adelaide away and the Brisbane Lions at the Gabba.

A more feasible goal is to make the top six, avoid an away elimination final and gather momentum. The pre-finals bye that assisted the Bulldogs to their miracle of 2016 would surely help Richmond, if they finished between five to eight on the ladder. There is an arguable disadvantage facing those who win the qualifying final and are consequently forced to have a second week’s break.

Last year, both the Lions and Port won qualifying finals and lost in the preliminary final to the match-hardened Geelong and Richmond.

Certainly, none of the teams that finish top four in the home-and-away season would relish meeting Richmond in a semi or preliminary final.

Their best, evident in the second half of the Bulldogs game, is capable of besting anyone else’s, even if Cotchin, Jack Riewoldt and Shane Edwards are 31 or 32. 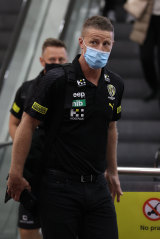 Lynch, obviously, is a significant loss. His expected six-week absence, however, is relatively well-timed in view of their run over that stretch. Richmond will be favoured to beat Adelaide and Essendon (despite the Dons’ superb comeback against the Eagles), and will meet West Coast in Perth in what could be a defining moment for both clubs. They will be heavy favourites for the subsequent three games – St Kilda, Gold Coast (away) and Collingwood.

Should the Tigers win the next two and then topple West Coast – who aren’t so imposing right now – they will garner serious momentum. The top four would not be beyond them.

Hardwick compared Richmond’s situation to last year, clearly referencing the benefits of the players leaving town and banding together. But, in terms of what’s required to win the flag, the equation facing them is arguably closer to 2019, when they were – incredibly – 7-6 at round 13, with a percentage of 92.

Richmond did not lose again, walking a tightrope right up until the preliminary final. Had they lost once, they wouldn’t have made the home-and-away top four and in that season.

In 2019, they had a string of early season injuries that gradually disappeared after the bye, in a run home similar to Hawthorn’s 2014.

Cotchin, such a physical presence in the trenches, is the most important inclusion given their relative lack of brawn, although Prestia and Bolton are only slightly less crucial, Bolton having exerted more influence on results this season than any player bar Dusty Martin.

In 2020, COVID almost undid the Tigers early in the season, as Hardwick became disdainful of the compliance measures and the team found it difficult to gel in a compromised training environment. But the pandemic ultimately worked in their favour.

This year, the sudden disruption of Victorian life has thrown the season into an abrupt chaos. And while no one in the competition wanted it, no team is better equipped to cope with chaos – on and off the field – than the improvisational Tigers.

If there is to be a run to the premiership, or even a serious crack at retaining the belt, it begins now.

Enjoy these five giants of world rugby while you can

Latrell bites back at ‘opinionated’ Cronk