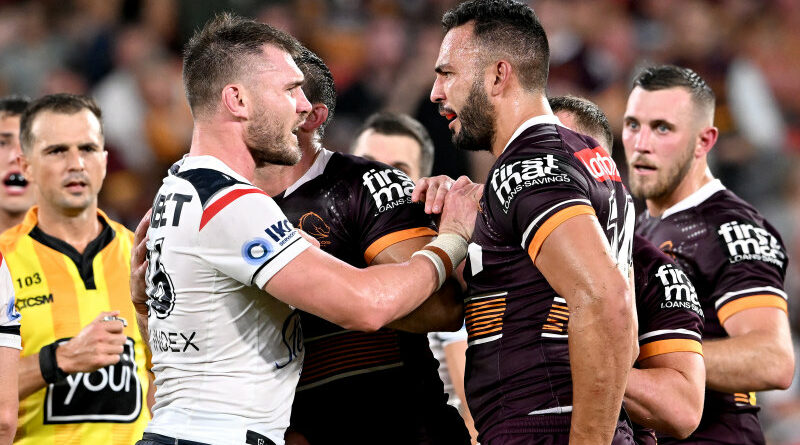 Waerea-Hargreaves is set to find out on Sunday if he faces a charge for twisting the leg of James. The match review committee was waiting to view additional camera angles from Redcliffe, where there were claims of a homophobic slur during the New Zealand Warriors-North Queensland clash.

Waerea-Hargreaves was put on report during the Roosters’ 24-20 win over Brisbane after he grabbed the ankle of James and then drove forward into his leg.

Roosters coach Trent Robinson said it was hard to offer an opinion as he had never seen the on-field act before, while TV commentators suggested the incident was exacerbated by James’ “gamesmanship”. Fox Sports caller Greg Alexander labelled it a “pedantic penalty”.

James said he never stays down, claiming he’d panicked after fearing yet another injury to his right knee. 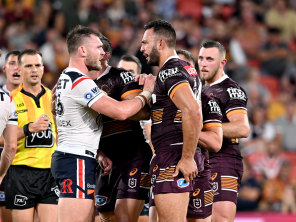 Things get heated between Angus Crichton and Ryan James on Friday night.Credit:Getty

“No footy player goes out to intentionally hurt anyone in that manner, but there was the initial shock for me because I had already had two reconstructions on that same knee,” James said. “It was in an awkward position. We’ve always had a good running battle. He tried to get a quick play-the-ball for his team, my ankle got caught, and he happened to have a hold of me.

’There were plenty of words said in between, but he [later] asked if I was all good, and I said, ‘Yeah, I’m all sweet, I was just a bit panicked there for a second’. I’ve got a bit of patella pain at the moment, but other than that I’ll be sweet. The physios checked it Friday night. It’s a contact sport, we sign up to play it, and that’s what it is. It was one of those things where everything that happened in the moment ended up not working – him trying to get a quick play-the-ball didn’t work.”

James will need to take on more of the workload should Payne Haas be sidelined, as expected, for his run-in with Albert Kelly in Sydney.

Bellamy hits out at ‘disjointed’ Storm after shock loss