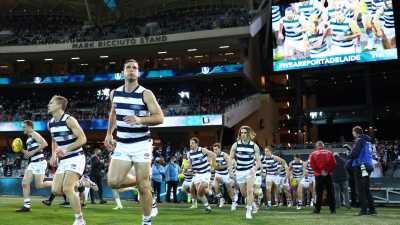 South Australia and Queensland will remain on standby to host the AFL grand final should the West Australian government make a snap decision to ban crowds from the showpiece event.

Perth’s Optus Stadium will host the September 25 grand final for the first time because of Melbourne’s coronavirus outbreak, and all parties are hopeful Perth’s strict border restrictions will ensure there is no late outbreak there. 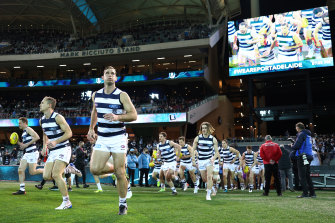 The Cats run out on to Adelaide Oval, one of the venues on standby for the AFL grand final.Credit:Getty Images

WA Premier Mark McGowan has made quick-fire lockdown calls through the year which have impacted on crowds at AFL matches. In May, this included banning crowds from Optus Stadium on the day of the West Coast versus Fremantle derby.

AFL chief Gillon McLachlan, who is in quarantine in Perth, said on Friday there were contingencies in place should no crowds be allowed come the big day.

“You assess where we are at in the rest of the country, whether that’s South Australia, [that’s] obviously an option, the Gabba. You would make an assessment on what is available but the hypotheticals, I have been asked that before, it’s a hypothetical,” McLachlan said on 3AW.

“There is a provision or contingency available in the agreement [with WA]. We don’t want to play in front of no crowds but we are currently playing here in Western Australia. There is a 100 per cent capacity available.”

However, the timing of a lockdown could be an issue. If there was a snap lockdown only hours before the opening bounce, the grand final may still proceed in Perth.

“I think clearly there are degrees. If it was the day out or 36 hours out – clearly, if you are two hours before, it would look different,” McLachlan said.

“Our position is clear. If crowds are locked out, if it’s any sort of reasonable time, play will hold or we will move the game. After that, it’s just a hypothetical.”

The Gabba held last year’s grand final when Melbourne was in lockdown, and had been in the running with the Adelaide Oval to host this month’s event.

McLachlan said Perth offered a “high-yielding stadium” – it has a capacity of 60,000 and boasts all the modern amenities, including LED signage.

“The commercial stuff will work out well for the game and community football and all that needs it,” he said.

The AFL has yet to confirm the timing of the opening bounce in conjunction with host broadcaster the Seven Network but McLachlan wants it to be family friendly.

“I am conscious of children being able to get through to the end of the game. It’s not going to be a 2.30pm eastern standard time bounce, the way it was planned for, because that’s 12.30pm in Perth … but it won’t be 8pm eastern, I can tell you that,” he said.

“We have had games in Perth that come into Melbourne at 8pm. It will not be that late, because I think it’s too late for kids.”

McLachlan was adamant that the weekend bye before the grand final would remain, despite debate on whether the league would be best to bring the match forward a week with the Perth community free of coronavirus.

“You have got teams coming in from other states, teams are moving,” he said, alluding to Port Adelaide hosting a home preliminary final next weekend.

“We have got certainty of the date. It’s a secure state here and we can plan for that date. We are not planning on moving the date of the grand final.”

McLachlan said Perth was planning a week-long celebration leading into the grand final and there would be a major event for the two teams to replace a traditional grand-final parade.

He added the pre-match entertainment would include West Australian artists.

NRL star gets his wish after pre-season sex scandal 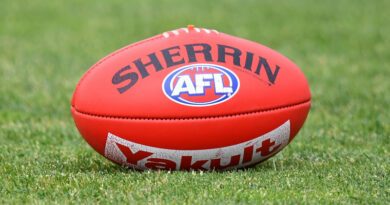