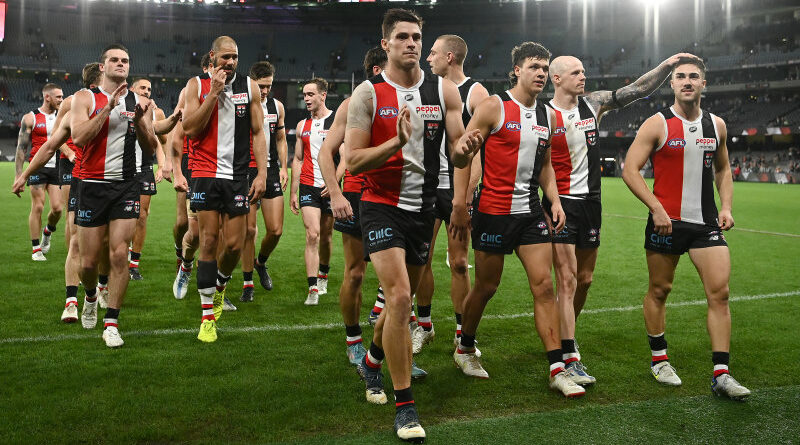 St Kilda have reinvigorated their season and ended a six-year drought while Geelong’s yo-yo campaign continues, after the Saints reaffirmed why they are the third-quarter specialists with a 10-point win at Marvel Stadium on Saturday.

While the Saints ended a two-game skid, coming after five straight victories, there are concerns about the health of Jack Higgins, who was concussed for the second time in five weeks. He was removed from the game deep into the second quarter, having had a major head knock against Richmond last month.

Higgins was concussed after a hip and shoulder from Jake Kolodjashnij, which will be scrutinised by the match review officer. He will miss next week’s trip to Adelaide to face the Crows, but that’s a minor consideration considering Higgins’ history of two rounds of brain surgery in 2019. 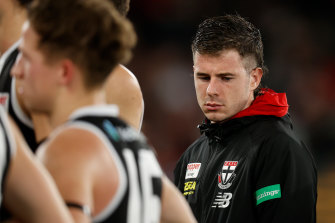 Jack Higgins on the sidelines after suffering from a concussion.Credit:Getty Images

Hard-nut midfielder Brad Crouch was superb, with a game-high 36 touches, while Jade Gresham, Seb Ross and Jack Sinclair provided run and carry. Defender Callum Wilkie held Jeremy Cameron to only one goal, while ruckman-forward Paddy Ryder was the difference in the final term, booting two goals on a day he also had 22 hit-outs and five marks, and teamed with Rowan Marshall to topple Rhys Stanley. 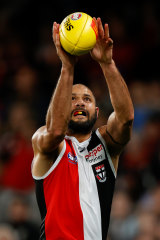 Paddy Ryder was the difference in the final term.Credit:Getty Images

Tom Hawkins threatened to will the Cats back into the contest, also with two goals for the term, but the Saints were able to steady.

Tom Stewart, a touch shaky late in the game, found plenty of the ball across half-back for the Cats, but Patrick Dangerfield, Joel Selwood and Cam Guthrie couldn’t generate enough drive, as Chris Scott’s side fell to the Saints for the first time since round 14, 2016. That the Cats have back-to-back wins only once this season is a concern.

The third term was something to behold, the Saints rebounding from 16 points behind to 16 points in front.

While Tim Membrey snapped his first major of the evening to start the term, the Cats, through Tuohy and Hawkins, responded in kind, giving Geelong a 21-point edge eight minutes into the term. Victory appeared well in their grasp, but the Saints were inspired when Zak Jones sharked a handball from Rowan Marshall at a stoppage and converted. This sparked a stunning run, for the Saints added another four in quick succession to take a nine-point lead.

At one point in the term, they had a 41-7 advantage in possessions, the Cats lacking run and confidence – highlighted when Stewart grassed an open mark. The Saints may be third-quarter specialists – this was the eighth time they have outscored an opponent in this term this season – but this was all the more meritorious because this came from a point of almost despair.

When Membrey marked and goaled after the siren, they had completed a seven-goal-to-two turnaround, and were primed to claim a major scalp. 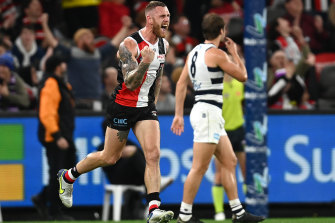 The match up between Saints spearhead Max King and star young defender Sam De Koning whetted the appetite for what lay ahead for the rest of the decade. De Koning has been a revelation this season, with his intercept marking a speciality. King had two goals to half-time – each fortuitous – but De Koning had 10 touches, including four marks.

There was a moment of first-term madness St Kilda coach Brett Ratten will no doubt review with his team this week. If it wasn’t bad enough that Jimmy Webster’s kick in was intercepted by Stanley, that he was allowed to go back, then whip a handball to Zach Tuohy for a running goal, was a breakdown that would have angered the coaching staff.

Gryan Miers has been more than a handy goal-kicker in recent years. He had 28 in 2019, 19 in 2020 and 12 last year. That’s why it was odd to realise his mark and successful snap in the first term was his first goal of this season, coming in his sixth game. Tyson Stengle’s emergence has made it harder for the Grovedale product to have an influence on the scoreboard.

Stengle continues to be one of the more inspired recruits of the year. The former Tiger and Crow has prospered since the Cats took the punt on him. He had 16 goals heading into Saturday’s clash, his pace and ability to deceive an opponent – he is always on the move inside attacking 50, not allowing his opponent to settle or work out which side to stand – a major factor. His long goal in the second term extended the Cats’ lead to 15 points, an advantage they preserved come the main break.

Back in the fold

Jack Billings, having battled hamstring issues, had his first senior game of the season. He came alive after half-time when shifted from the midfield to attacking 50. 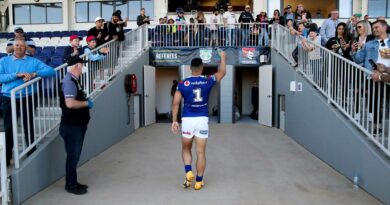 Roger Tuivasa-Sheck’s former rugby coach excited for reported switch to union, says captain has given the Warriors ‘everything’