Family ties to St Kilda, including the standing of his late uncle Danny Frawley, was an important factor in James Frawley coming out of retirement to join the Saints for 2021.

Frawley retired from Hawthorn at the end of the 2020 season but was picked up by the Saints this week as a delisted free agent, with former Hawks teammate and now Saints assistant coach Jarryd Roughead the first to pitch Frawley the idea continuing at Moorabbin. 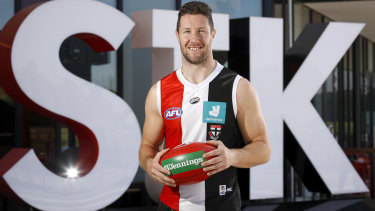 James Frawley barracked for the Saints as a kid, and watched his late uncle Danny captain the club. Credit:Getty Images

The 32-year-old and 2015 premiership player told reporters on Friday that his uncle Danny – who captained St Kilda from 1987-1995 and died in September 2019 – would have joked with him to make sure he lived up to what is a famous name at Moorabbin.

"He [Danny] would probably come and give me a headlock and a punch in the arm and say ‘you’ve got a big name to live up to mate, don’t stuff it up’," Frawley said of his uncle.

"It’s an honour to be here, the Danny Frawley Centre opening up. Everyone knows he went through his battles.

"It’s a great thing for the community to have somewhere they can go if they are struggling … and get some help."

Frawley also reflected on his time growing up and supporting St Kilda with the rest of his family.

"My old man, pretty much my whole family, barracks for St Kilda," he said.

"I used to go down to Waverley every weekend and the old man and we’d go down the rooms and hang out with the players, that’s where my passion started wanting to play footy."

The defender was first approached by Roughead in Noosa and informed of St Kilda's interest. He had around six weeks off in Queensland following his retirement before the approach, and had planned to play VAFA footy and begin looking for work.

"I was a bit surprised and it went from there," he said. "I'd had a few more beers than I usually would and a couple of meals I wouldn’t usually eat."

The 2010 All-Australian said he was putting no limits on how much longer he might last at AFL level. If 2021 went well, who knows what 2022 could hold, he said.

"I am pretty genetically blessed with the old man and Mum were both pretty quick, my Pa [grandpa] ran Stawell [Gift], I am pretty lucky [to still have speed]," he said.

"When I told Dad and he loved it … he said to me, ‘At least I can go back to barracking for St Kilda now’."

Brad Scott brushes aside speculation about his coaching future