Roberton, who felt "wonky" and unwell at the end of the practice match against the Western Bulldogs, travelled back to Melbourne with doctors and spent the night in hospital where he was assessed by a cardiologist and monitored by doctors. 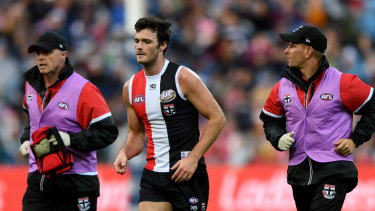 He was released to go home on Monday, reporting that he felt fine again, but he will be back for further tests and a return to playing must now wait until doctors have analysed why he had the turn in the game and understand his situation better.

McCartin, who suffered his eighth concussion since 2014 when he collided with teammate Ben Long, sat out the second half of the practice match. After the game he felt agitated and it was decided he should spend the night in Ballarat's St John of God hospital rather than drive home.

He returned to Melbourne on Monday and will be further assessed by doctors this week to monitor his concussion.

Roberton, who collapsed on the field due to a heart irregularity last April and did not play again in 2018, has been playing with a small electronic device inserted in his chest to measure his heart, which is set to activate and correct abnormalities should they occur. 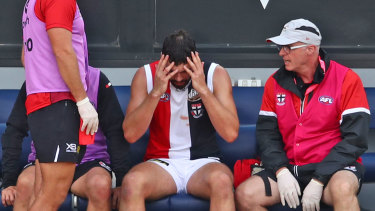 Careful return: Paddy McCartin spent the night in hospital after yet another head knock.Credit:AFL Media

That device also takes recordings, so the cardiologist this week will assess the datafrom during the match and try to ascertain why Roberton had an issue or irregularity in this match when he had been cleared in all other tests over months.

He had already played one JLT match, a practice match and more than a dozen intra-club match simulations in training as well as passing a stress test only a week ago.

“We’ll know more in the next few days as to what caused him to feel unwell and what the prognosis is from here,” St Kilda football manager Simon Lethlean said.

He added that the club would also be cautious with McCartin's return to playing.

“As with every concussion, it’s now just about his symptoms as to how quickly he’ll be back on the track,” he said.

“Given his history of head knocks, it goes without saying that we’ll take a cautious approach.”

In better news, St Kilda were boosted by the return of Jack Steven from a break in Broome as he dealt with mental health and personal issues. The star midfielder was in Ballarat to watch the Saints on Sunday.