Shaun Smith is supportive of his daughter's entry into the AFLW competition despite the lingering effects of his head trauma suffered while playing football.

Amy Smith, 21, has joined North Melbourne, a move which will be formalised at next week's AFLW draft after the Kangaroos nominated her as a father-daughter selection.

Shaun, 51, played 47 games for North as well as 62 for Melbourne, where his son Joel is an AFL-listed player. 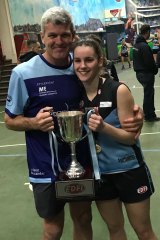 Formerly a basketballer, 170-centimetre Amy only took up football seriously last year, winning a senior premiership in the Essendon District league with Aberfeldie. She was signed by Williamstown in the VFLW but the season did not proceed because of COVID-19.

North have earmarked her for a role either in defence or the midfield.

Shaun, famous for his "mark of the century" while playing for the Dees at the Gabba in 1995, last month made headlines after receiving a $1.4 million insurance payout in relation to ongoing mental health issues which he says are related to concussions suffered during his career.

He said he supported his children in following their dreams but was mindful of the risks associated with football. 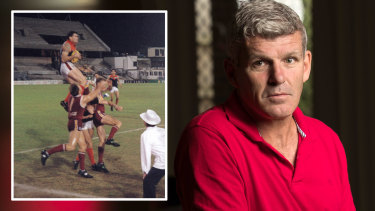 Shaun Smith and THAT mark in the 1990s.Credit:The Age

"Obviously she was a very good basketballer. You might have liked to see how she would have gone that way. Same with Joel. I can just back my kids up. I can't tell them what to do. It's their life," Smith told The Age on Tuesday.

"But obviously they know what's happened to me. I know they are fully aware if there are head knocks involved they would be very conservative in the treatment side of things, returning to play protocols, because they've obviously seen the downsides of it with the way I was going about things."

Shaun has been impressed by his daughter's rapid progress.

"Amy hasn't played a lot of footy up until now. Her progress over the last couple of years has been quite amazing. North have been talking to her for a little bit, so have Melbourne.

"She only started playing footy at the start of last year.

"She's come a long, long way. I was on Open Mike six months before Amy started playing footy. Mike asked me, 'do you think Amy will play footy?' and I said 'nah, nah.' It just came out of left-field. Obviously we support her in anything she does."

Amy would also have been eligible to be picked up as a father-daughter player by the Dees, but they chose not to nominate her.

St Kilda have meanwhile nabbed Alice Burke, daughter of former Saints skipper and now Western Bulldogs women's coach Nathan, as a father-daughter selection, while Tarni Brown, daughter of Gavin, joins older brothers Callum and Tyler at Collingwood, where her father was a captain and premiership player.

“It’s a great honour to start my AFLW career at Collingwood,” Tarni said.

“I hope to one day establish a name for myself at the club but for now to contribute to the Brown family legacy is a privilege.”

St Kilda AFLW chief Jamie Cox said Alice had what it took to make it in the top league as a midfielder.

“Alice has been part of our father-daughter academy in the past few years and we’ve obviously been in discussions with her for some time but to have it now confirmed is exciting," Cox said.

Team of the week: The stars from the latest Super League and NRL matches

Money had nothing to do with Tigers split, says Matterson